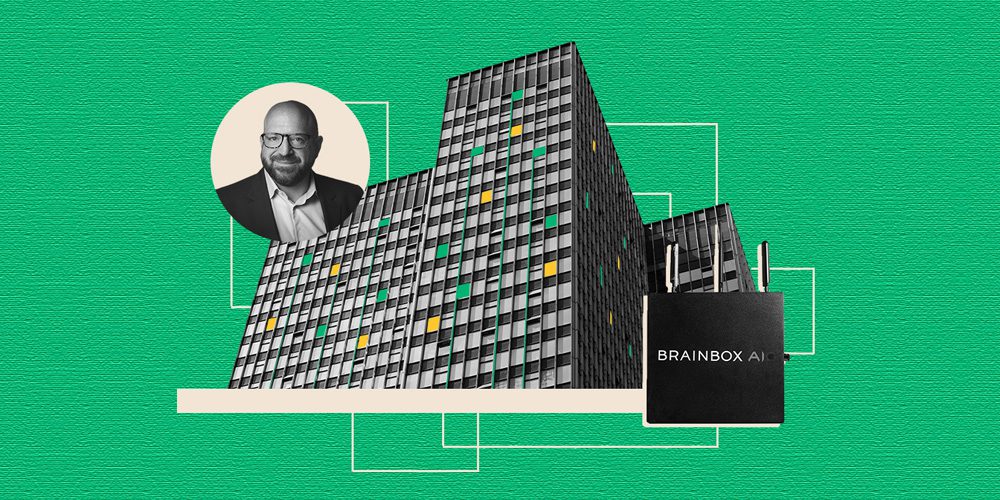 When employees finally head back to the office, some may notice a subtle change: they don’t have to throw on or remove their sweater as often. That is, if their building has been outfitted with a groundbreaking artificial-intelligence system created by Montreal company BrainBox AI.

The company’s technology uses advanced A.I. to control commercial heating, ventilation and air conditioning (HVAC) systems in real time. Examining data like local weather forecasts, seasonal climate and previous use, it can predict what the building will need to maintain a comfortable temperature without blasting the heater or air conditioner. It’s predictive, not reactive.

Think of it as a smart thermostat like Nest or ecobee, but for bigger and more complex buildings.

And, as a Canadian leader in the green building revolution, BrainBox AI also has the power to have a sizable environmental impact.

“Our mission is saving the planet with A.I.,” says Sam Ramadori, president of BrainBox AI.

Ramadori admits that before he joined the company in 2019, he was hardly a card-carrying environmentalist. He was like many Canadians: worried about climate change and certainly aware of the challenges, but unsure how to make a difference. But once he learned more about what BrainBox AI systems could do, he saw enormous potential for helping companies achieve carbon neutrality.

“When I saw how BrainBox had such a dramatic impact on one of the asset classes that uses the most energy in the world — and could do so in a way that wasn’t just an acceptable trade-off, but actually beneficial to the customer — I said, ‘O.K., this is how we get to impact,’” he explains.

Ramadori became employee number 17. Today, BrainBox AI employs 115 people, and is still growing. Its flagship product has been installed in more than 100 million square feet of real estate in 17 countries.

When it comes to tackling climate change, HVAC solutions might not seem bold or radical enough. But making buildings more efficient can have an outsized impact. According to an International Energy Agency report, carbon dioxide emissions from buildings reached an all-time high in 2019, and were responsible for 28 percent of emissions globally. HVAC systems make up more than 50 percent of that. Dramatically reducing the amount of energy required to heat and cool our schools, malls, office towers and public libraries could make a significant difference.

“We always think about buildings as being pretty benign,” says Thomas Mueller, president and CEO of Canada Green Building Council in Vancouver. “But we need to step back and realize that they make a very significant contribution to emissions. If we don’t reduce greenhouse-gas (GHG) emissions at home, work and schools, we’re not going to achieve our targets in Canada or anywhere else.”

While brand new buildings certainly have a place in reducing GHGs when they’re built as sustainably as possible, even the greenest construction requires more carbon to create and transport new building materials. Plus, new builds makeup only a small fraction of existing real estate each year. It’s better to improve what we’ve got, Mueller says, while ensuring all new buildings are green, too.

“What’s really important is that we retrofit the larger buildings, those over 25,000 square feet,” says Mueller, explaining that 70 to 80 percent of buildings that exist today will still be around in 2050. “We need to retrofit tens of thousands of those over the next 30 years in order to reach our climate-change targets.”

Ramadori agrees. Unlike electric or hybrid cars, which can be built new, rolled off the line quickly — and then are discarded after a decade — buildings remain standing for decades or centuries. They’re not exactly cookie cutter either. Ramadori calls older buildings, “snowflakes.” No two are alike.

The beauty of an A.I. system, is that despite these differences, it can be implemented anywhere without having to change a building’s structure or rip out an existing HVAC system. In fact, it’s so scalable, when the pandemic hit, BrainBox AI was still able to install systems remotely in Europe without ever getting on a plane. They shipped the unit and helped HVAC experts on the other side of the pond get set up.

That’s only one of the reasons the BrainBox AI system is an easy sell, says Ramadori. Instead of a so-called green premium — where an environmentally-friendly product costs more than the traditional version — the BrainBox system actually saves money. And quickly. Based on collected data, Ramadori estimates that the return on investment isn’t measured in years or decades, but mere months.

Current clients report a savings of 25 to 29 percent on their energy bills once the BrainBox systems are set up, all without having to install costly new windows, cladding or insulation, Ramadori says. BrainBox AI can predict desired room temperatures up to six hours in advance with 99 percent accuracy, and makes micro adjustments to heating and cooling. Wasted energy plummets.

“So, think about the incentive,” Ramadori says. “Never mind just doing right for the planet. Marry that with the dollars-and-cents motivation and you can see why it’s scaling so rapidly.”

The quick uptake and interest in the company — BrainBox AI was recognized as a TIME Best Invention of 2020 — gives Ramadori hope for the future of the planet. He’s also cognizant that as there is more pressure from financial markets on the development and property-management industries to measure sustainability, that will have an impact, too.

Environmental, social and governance (ESG) goals are becoming more of a priority for many companies and there are emerging standards, such as the Green Real Estate Sustainability Benchmark (GRESB), which now covers U.S.$5.3 trillion in real asset value. However, there isn’t one universal approach to measure progress — that’s something that groups such as the Impact Management Project are working to establish so that companies like BrainBox can have a clearer sense of what they should be incorporating in their products to help their customers.

Momentum is starting to build. “It’s happening. The average person is saying, ‘Oh, boy. We’ve got to do something about the environment,” Ramadori says. “I see real change, but we’ve just got to go fast.”

BrainBox AI is one of 10 companies in Mission from MaRS, a special initiative that’s working to tackle the global climate crisis by accelerating the adoption of new solutions.