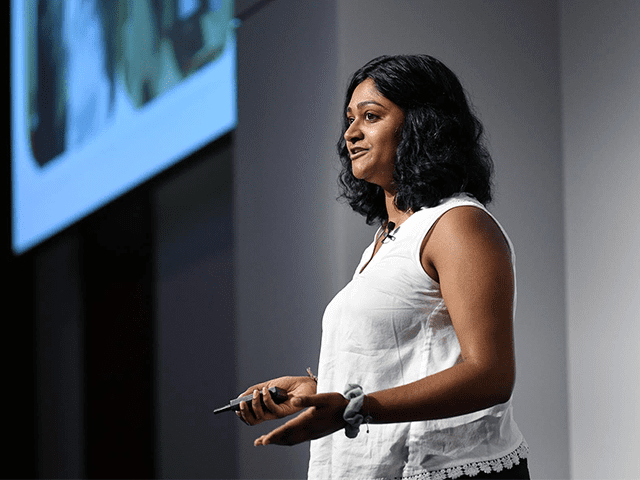 Over the coming months, MaRS will showcase each of the incredible finalists from our Women in Cleantech Challenge. In this installment, we profile Nivatha Balendra, scientist, founder and proud Montrealais.

Nivatha Balendra has already achieved more than most people do in a lifetime. Currently a student at McGill University, Nivatha has discovered and named her own bacteria, received the World Economic Forum Prize at the Intel International Science and Engineering Fair, and started a non-profit that mentors young scientists.

“It’s surreal,” she says of her early success. “It makes me happy and grateful and excited all at once.”

This past September, Nivatha became one of six finalists for the Women in Cleantech Challenge, impressing a panel of esteemed judges, including legendary author and entrepreneur, Margaret Atwood. Her pitch centred on her discovery of a novel, oil-degrading bacteria.

Nivatha was in high school when she became interested in the world’s inability to sustainably clean oil spills. Through research, she learned that there existed certain forms of bacteria (Pseudomonas fluorescens) in soil that produced molecular compounds capable of degrading oil organically. Intrepid, Nivatha immediately began sampling moist soil from her backyard on the Saint Lawrence River.

Nivatha’s potential solution (unlike most chemical detergents) is completely biodegradable and very affordable. If properly developed, her discovery could clean everything from oil sands tailing ponds to ocean rig spills. When you consider that a disaster like BP’s Deepwater Horizon oil spill cost $62 billion to clean up, Nivatha’s is the kind of solution that could revolutionize the global energy industry.

“There’s a clear, dire need for this in the cleantech sector,” says Nivatha. “I want to be the person to deliver it.”

Now, with funding, guidance and support from MaRS and the Government of Canada, she embarks on a 30-month journey to develop and sell her breakthrough product, all of it culminating with her chance to win $1 million and the title of Women in Cleantech champion.

The young scientist admits that she’s more comfortable in a lab than out courting corporate partners. But that’s the beauty of the Challenge. “I never identified as an entrepreneur until I made this discovery,” Nivatha says. “This is a great learning opportunity for me. I think my product is the solution the world’s been waiting for.”

Luckily, Nivatha has never been one to slow down.

Visit the Women in Cleantech Challenge website to learn more about our finalists.