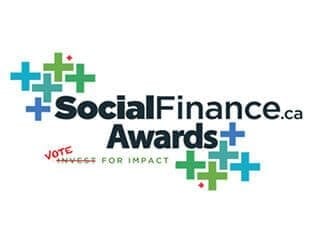 Note: This post originally appeared on SocialFinance.ca. It has been reposted here with permission from the author.

At SocialFinance.ca and the MaRS Centre for Impact Investing, we are dedicated to building the social finance marketplace and ultimately shifting the existing financial system. The transformative potential of social finance is deeply rooted in its ability to mobilize the resources of traditionally fragmented sectors towards a common vision of social or environmental good.

The Social Finance Innovator Award is an annual people’s choice award presented to trailblazing innovators in the Canadian social finance landscape based on a theme selected by SocialFinance.ca. Investors and social entrepreneurs both play a key role in ensuring the advancement of the social finance landscape in Canada which is why this year’s Social Finance Innovator Award theme is “Moving Money that Matters.”

In early fall we opened up a public nomination period, from which we are pleased to announce the seven finalists for this year’s award. Now it is your turn to speak up and vote for the social finance deal that you feel deserves the title of “Moving Money that Matters” and winner of this year’s award.

Join us at the Social Finance Forum

The winner of the Social Finance Awards will be announced November 7, 2014 at this year’s Social Finance Forum, the place to engage leaders and practitioners in the diverse social finance scene. If you don’t have your tickets yet for the Forum, buy them before its too late!