Waking the Frog: Four causes of our climate change paralysis 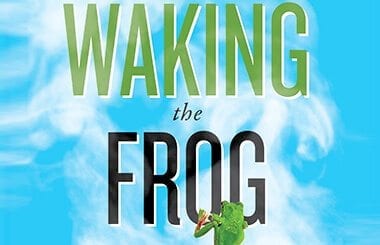 On April 3, Tom Rand launched his second book, Waking the Frog: Solutions for Our Climate Change Paralysis, with a keynote address at MaRS. Waking the Frog dives deep into the human condition to explain how society responds to climate change, highlighting real solutions for the future. 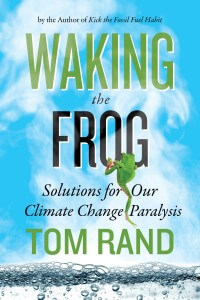 A pragmatic entrepreneur, active investor and MaRS advisor to cleantech companies, Tom really does “walk the talk.” He built Canada’s greenest hotel in downtown Toronto, demonstrating not only that clean technology is affordable, but that it can also generate generous returns on investment.

Waking the Frog is an honest look at the how societal factors immobilize us in the fight against climate change and how we can overcome them. Throughout the book, Tom draws from a popular, if likely untrue myth: put a frog in a pot of water, increase the temperature of the water gradually and the frog will remain unaware of the impending danger until it’s too late. We’re that frog!

While carbon dioxide emissions continue to pour into our atmosphere, driving climate change, our psychology, momentum, markets and economics keep us from “waking up” and acting. Tom also describes four causes of our climate change paralysis.

1. Hard to think about

Thinking about rising global temperatures makes us feel uncomfortable. Waking the Frog explains the psychology behind those feelings. The truth challenges our core beliefs, which triggers passive denial—knowing that something is true, but proceeding as though it isn’t true—leading us to unconsciously reach for experiences and facts that reiterate what we want to be true.

The scientific community has been telling us about climate change for years now, presenting us with facts and statistics, but, according to Tom, we need to tell the truth in a different way. We “need news stories of clean [technology] abundance,” he explains. We need to employ marketing techniques to dress clean technology up and to make it sexy and engaging to the public.

2. Our hands are tied

Tom is quick to point out the fact that “us and them doesn’t work anymore—it’s just us.” We are all in climate change together and we need to work with fossil fuel companies in order to create our new story. Fossil fuel companies bring assets to the table that make them great collaboration partners and they can help build solutions.

3. The market is a steamroller!

According to the book, the concept of a free market is both a myth and a paradox. If left truly free, structure will emerge to govern. The question that Tom asks is: “What structure do we want, to build the economy that we want?”

The market models and rules that have emerged over the last several decades are based on the assumption that markets drive toward equilibrium. However, equilibrium is a kind of death, with nothing changing or evolving. The economy, which is composed of trillions of transactions, is constantly evolving as new technologies are introduced, changing the very nature of our interactions. Waking the Frog argues that change is inherent to the system.

“Changing the rules of the game is like adding gravity to the system,” says Tom. We can’t predict exactly how a price on carbon will change the system, but we can (and do) predict that it will result in lower carbon emissions.

A cost benefit analysis is fundamental in business, but when applied to climate change it can “take the monster out of the story.” The results, calculated with astounding accuracy, fail to take into account the vital difference between risk and uncertainty. With risk, we don’t know the outcome, but we understand the system and the probabilities of different results. Uncertainty however, represents the “unknown unknowns,” where we do not know the outcome, the probabilities or the system.

According to Tom, climate change is the ultimate unknown unknown. “This has never happened before,” he says, and “you have to treat uncertainly with respect”— something that current models do not employ.

When taking into account only the costs and none of the benefits that de-carboning our environment will provide—and there will be lots of benefits—we’re looking at about a $40 trillion price tag to “buy insurance for the planet.” Is the equivalent of a coffee and donut a week for every person on the planet really too expensive to insure our future?

Tom believes that we’re using the wrong language to communicate climate change and that generalizations can actually be more helpful than specific answers. He used the analogy that we cannot, with any accuracy, predict where a piece of paper falling from a tower will land, but if it’s a $20 bill we know exactly where it will end up: in someone’s pocket!

We “stand at a time in history where we have unparalleled wealth, innovation, communications, industrial might… and unparalleled amounts of cash,” explains Tom.

Investing in climate change is like buying climate insurance: it just makes sense. All we have to do is WAKE UP.

You can see a nine-minute highlight reel from Tom’s recent address below: