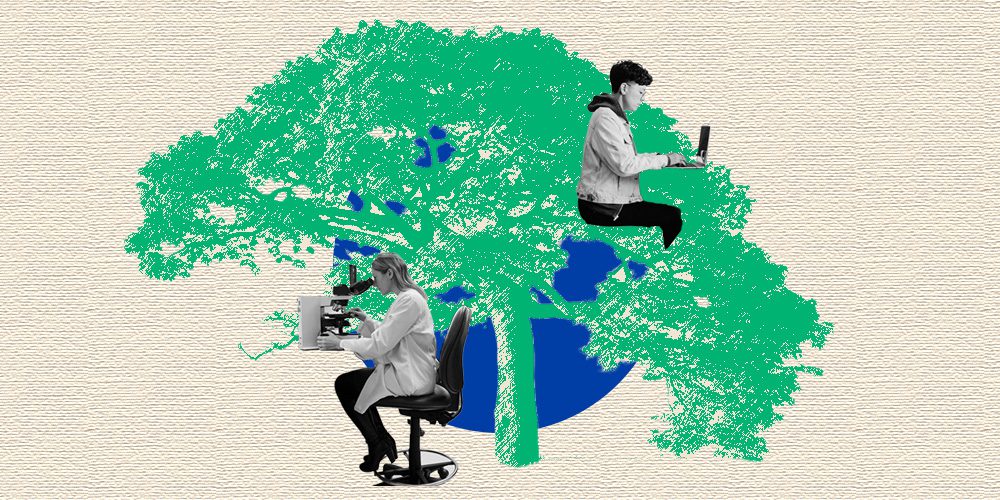 Cleantech will soon be a pillar of the Canadian job market. Three York University students discuss why they joined the Mission from MaRS: Climate Impact Challenge to kickstart their careers.

The globe could cross the threshold for dangerous warming as early as 2027, according to the World Economic Forum. So, while Canada has committed to a net-zero economy by 2050, the transition can’t come soon enough, especially for those set to be stewards of that economy — and planet.

“Cleantech is not yet a dominant conversation, even among students on campus,” says Lul Ali, an undergrad at York University’s Schulich School of Business. “The field is just so new.” But that, of course, means more opportunity. For instance, a new study from RBC Economics predicts that three million jobs, or about 15 percent of the economy, will soon undergo “green-skills” education and training to meet Canada’s ambitious climate targets.

Ali sought a fellowship with Mission from MaRS, a program supporting 10 of Canada’s most-promising cleantech companies as they scale their innovations. For the initiative, MaRS partnered with Schulich to help its graduate and undergraduate students launch their business careers while also earning academic credits. “Even before I was accepted into Mission from MaRS,” Ali says, “I saw cleantech as a saving grace.”

A special coalition of tech-sector veterans and corporate partners was established for each of the 10 companies in Mission from MaRS, and last September, one fellow from Schulich was appointed to each coalition. The fellows attend monthly roundtables and workshops, conduct research, as well as draft strategy documents aimed at dismantling the venture’s greatest barriers to scaling adoption of their solutions.

Ali applied to work with Squamish-based Carbon Engineering, a pioneer of direct air capture tech, which literally sucks CO2 from the atmosphere. She was eager to learn more about the cutting-edge technology. “Most people I know don’t even know that direct air capture exists,” she says. Plus, Carbon Engineering’s mission best reflected her own area of academic focus: responsible business.

It’s a common thread among all the fellows — the desire to kickstart their careers while doing right by the planet. “This program is really influencing my thoughts on who I eventually want to work for,” says Troy Dhillon, who is a fellow with Flash Forest, a Toronto venture that uses drones to plant trees. “Even with limited budgets, these companies want to make a positive impact — it shows that they care about young people. We’re the generation that has to deal with the environment.”

The program has forced Dhillon to step outside his comfort zone in positive ways, he says. Learning to speak the language of experts in disparate fields — entrepreneurs, scientists, investors, customers — has been invaluable, he says, enhancing his more theoretical lessons in the classroom.

Irene Lam, project manager for Mission from MaRS, sees mutual benefit among the students and companies. “In addition to doing essential behind-the-scenes work, the fellows bring a fresh perspective to the barriers we’re trying to address,” she says. “And because they meet with the Climate Champions frequently, they’re crucial in shaping the strategies and conversations of the coalition.”

MBA candidate Himanshi Sharma, who was paired with Extract Energy, is helping to draft the action plan to help the venture integrate its tech (which recycles waste heat) with the existing infrastructure of the world’s largest corporations. Sharma, who specializes in impact investing with a background in humanities, applied to work with Extract Energy because, as she puts it, the venture is a potential “change-maker in all industries.” Though Sharma doesn’t have a science-and-tech background, the coaching provided by the Mission from MaRS team, as well as her contributions to strategic talks, has given her the tools for a career in cleantech.

This immersive education deepened Sharma’s perspective of the crisis at hand, as well as the career path at her feet, she says. “Sustainability in the 2020s is not a choice. If we want to maintain lifestyles and live on a breathable planet, changes have to be made by coalitions: governments, corporations, startups, non-profits,” she says. “Eventually these reins will be in our hands.”

These 10 Canadian companies have the potential to reduce CO2 emissions by 42 megatons by 2030. Meet the Mission from MaRS Climate Champions.