Conventional wisdom says lost neurons don’t come back. But this University of Toronto professor is anything but conventional. 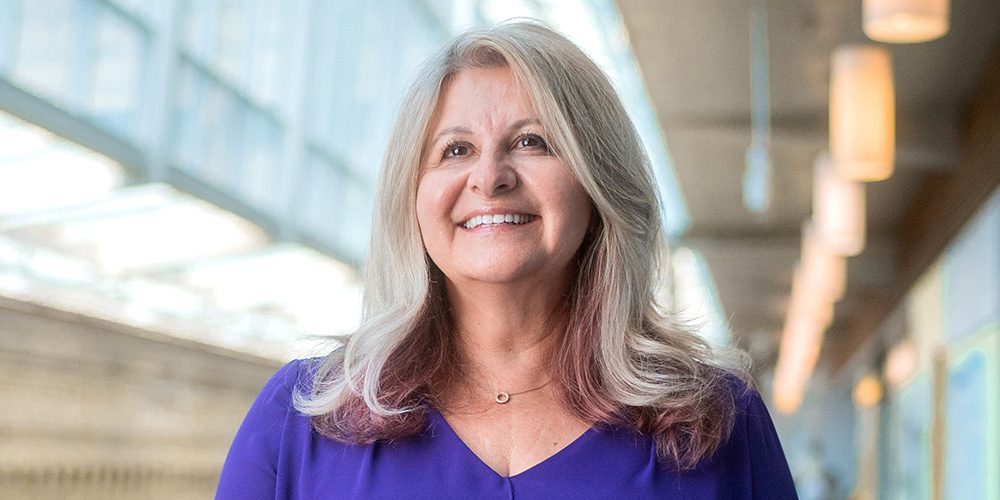 Back in the early 1990s, when 30,000 eager attendees filed into the Society for Neuroscience’s annual meeting, the talk of the conference was Samuel Weiss’s jaw-dropping discovery of neural stem cells. At the time, scientific dogma insisted the brain had no regenerative capacity: you do drugs, you bump your head, you lose neurons and they never come back. Weiss’s research showed that cells in the adult brain could make new neurons, opening the door to dramatic possibilities for neural repair.

There was just one hitch.

“They had kind of taken this melon-ball scoop of the brain, so they didn’t really know where the stem cells were,” says Cindi Morshead, who arrived at the conference as a University of Toronto graduate student and full-fledged “neuro nerd.”

Her research, however, focused on the lateral ventricles of the forebrain, and she had a sneaking suspicion that’s where they were hiding. “I just walked up to Sam’s graduate student and said, ‘I know where the stem cells are.’” A handful of experiments later, she was proved right.

Morshead wasn’t a brash student, brimming with confidence. In fact, as one of just five female scientists currently at U of T’s Donnelly Centre for Cellular and Biomolecular Research, she says she still contends with impostor syndrome. But ever since taking a third-year undergraduate course in neuro-psychopharmacology — where she first became enamoured with the brain — Morshead has seized any opportunity to work in the field she loves.

“I kicked ass on this one neuroanatomy exam, and that meant I got to do research with Derek van der Kooy, who ended up being my mentor,” she recalls. Her graduate work involved using viral vectors for cell lineage tracing, a new technique at the time.

“There were people who needed the expertise that I had” — people like Weiss and Bryan Kolb, both titans in Canadian neuroscience — “so I literally called them up and said, ‘I know this is what you should do, and I can do it for you,’” Morshead says. “The whole idea of putting myself out there was hard, but I really had no choice. I had to break into that field.”

Now the chair of the anatomy division in the department of surgery at U of T, Morshead is once again helping upend expectations about brain cells. As part of the regenerative medicine hub Medicine by Design, which receives funding from the Canada First Research Excellence Fund, she’s exploring the possibility of using gene therapy to treat neurodegenerative disorders, particularly strokes.

For the 50,000-plus Canadians who have a stroke each year, cutting off the blood supply to their brains, time is of the essence. “Neurons are very greedy cells and require constant oxygen and glucose, so they start to die within minutes to hours,” she says. A stroke can often cause certain brain cells called astrocytes — which play a key role in supporting the transmission of neural messages and keeping the brain in equilibrium — to become toxic, killing even more neurons.

What if, Morshead and her team wondered, we could make new neurons in the brain to take their place? To do so, they infected astrocytes in mice brains with a nonreplicating virus containing the DNA code for NEUROD1, a transcription factor that expresses genes typically found in neurons. Within a matter of weeks, those astrocytes had transformed into functioning neurons. “We’re able to replace a lost cell and we’re able to get rid of a toxic cell,” Morshead says. “It’s sort of a double whammy.”

Following a stroke, people tend to have motor impairments and weakened grip strength. But Morshead found that after the mice were given the transcription factors, “all of these behaviours improved, and it was correlated with this new production of neurons,” she says. “So that was phenomenal.”

It points to the possibility of treatment that might profoundly help stroke patients, who are often given very little reason to hope. Even small changes can have an enormous impact on the quality of their lives. “Being able to pick up a utensil or scratch the itch on their neck rather than asking someone else to scratch it — that can make such a difference,” she says.

This gene therapy has implications for other neurodegenerative diseases, too: Morshead is collaborating with Sunnybrook scientists like Carol Schuurmans (whose group studies ALS) and JoAnne McLaurin (whose team works in Alzheimer’s disease). “They’re finding that using gene therapy to turn astrocytes into neurons is showing improved outcomes in their animal models, which is huge.”

When Morshead first pursued brain research as an undergraduate student, she told herself she’d just keep doing the work until she didn’t like it anymore — and then maybe she’d go to teacher’s college or try dentistry. “But I’ve been really lucky,” she says. “My work has taken many turns, but I still love the brain.”

Early detection of Alzheimer’s: Toronto-based startup RetiSpec has developed a hyperspectral eye scan that can identify biomarkers of Alzheimer’s 15 to 20 years before the onset of symptoms. Because the brain shares tissues, nerves and blood flow with our eyes, this scan can give doctors a snapshot of what’s happening in the brain.

Watching for signs of pain: As pain can be hard to assess and treat among people with severe dementia, researchers at the University of Regina have developed an image processing system that alerts nurses whenever it detects expressions of discomfort on patients’ faces.

Promoting brain healing: In addition to Cindi Morshead’s work, Medicine by Design supports gene therapy studies at Sunnybrook Research Institute and the University of Toronto to advance approaches to regenerate cells lost or damaged by brain injury or disease.

Beating bias: Can we make AI that’s more open-minded than we are?

Zap it, trap it, transform it: Canada’s innovators have some ideas for sinking our carbon problem