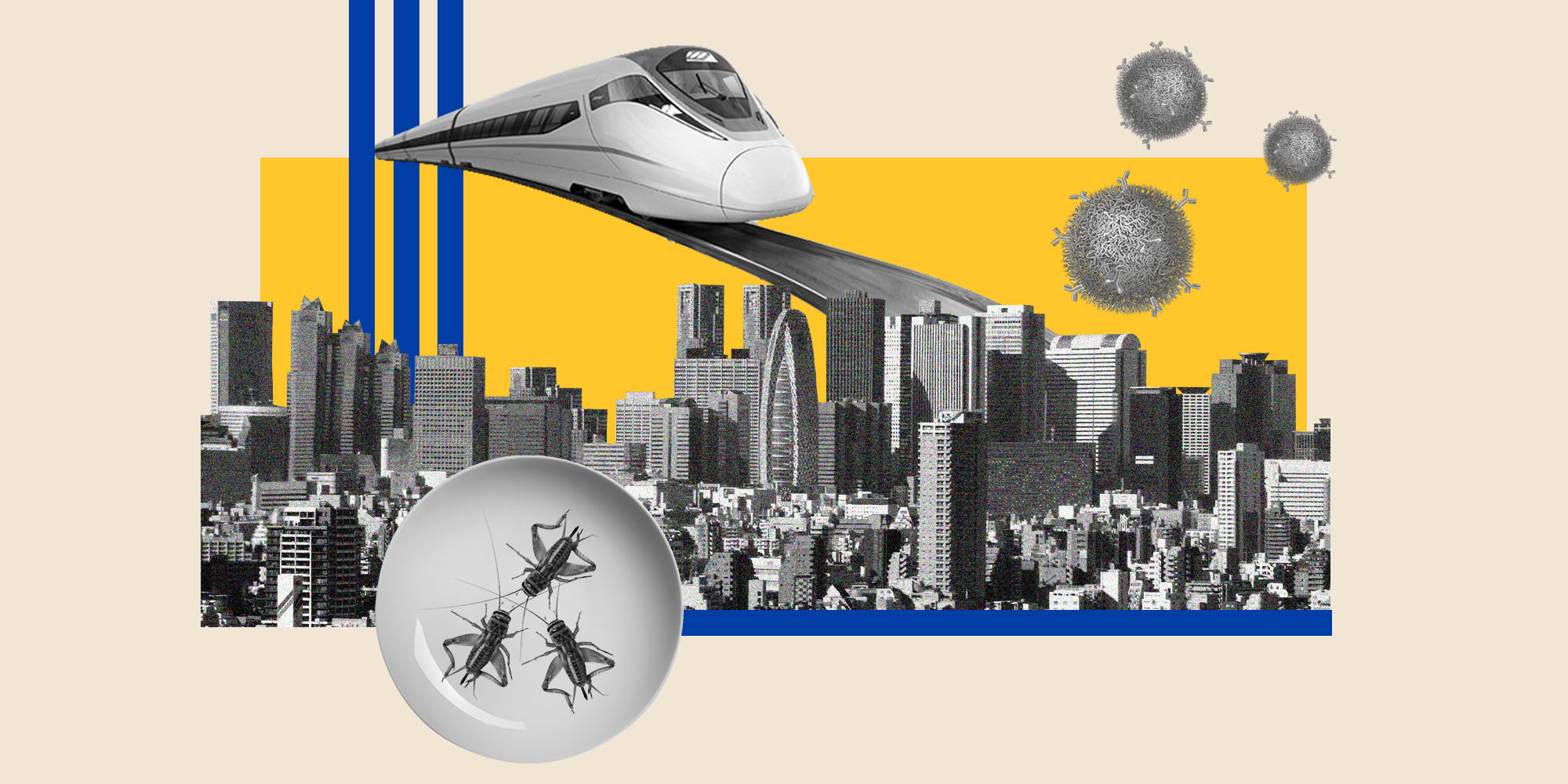 From levitating trains to insect farming and AI-based hiring, local entrepreneurs are carrying on Canada’s legacy of innovation.

Innovation is an essential part of Canada’s story. The world’s first telephone call rang out here. We discovered insulin and created the alkaline battery and the zipper. The Canadarm remains an icon of engineering prowess.

Now, as the pandemic accelerates the shift toward digital technologies and the need to build back better becomes acute, Canadian companies are rapidly making advances that will touch every part of our lives. They are leveraging our status as the birthplace of modern artificial intelligence and our deep expertise in health and clean technologies to innovate across the board, tackling everything from existential matters like climate change to reducing the friction points in our day-to-day lives.

Here are seven new technologies that will have a major impact on how we live, eat and work.

On a 12-acre site in London, Ont., Aspire Food Group is building the world’s largest cricket farming facility. Bristling with sensors and artificial intelligence to maintain optimal conditions, the plant will produce 12,000 metric tonnes of food-grade crickets annually. Aspire turns its crickets into nutritious powder to enrich foods for human consumption, including a recently launched Loblaws protein bar. (It is also a common ingredient in pet foods aimed at owners conscious of their furry friend’s carbon paw print.) Mohammed Ashour, the company’s co-founder, says insects will have to become a larger part of the diet if we are to feed the growing global population sustainably. “We’ve tended to embrace certain foods remarkably quickly,” he says. “If you look at sushi, 25 years ago the idea of eating raw fish for most Canadians was preposterous. We think a very similar development will occur with insects and other alternative proteins.”

A new way of getting around: Magnetic levitation vehicles on demand

Futurists have long dreamed of magnetic levitation trains hurtling between hubs like Toronto and Montreal. Magnovate is taking that further with technology that enables entire networks of autonomous vehicles to glide around cities on frictionless magnetic tracks. It envisions a flexible system of on-demand vehicles that could take users from door to door while reaching near-aircraft velocity on high-speed sections between cities. It is working on test projects around the world, including building a people mover at Toronto Zoo that is slated for completion next year, a commuter project in Texas and a rail line in Saudi Arabia.

To see the future of retail, look in the mirror. That’s where Calgary-based Nobal has embedded interactive technologies that turn mirrors into digital shopping assistants. Its iMirrors can be found in stores such as Selfridges in the U.K. and Puma’s flagship location in New York, where they create digital avatars of shoppers, enabling them to virtually try on different styles and sizes. It can also make outfit recommendations and let you know what products are in stock. Nobal CEO Bill Roberts says products that blur the lines between the brick-and-mortar and digital worlds will help retailers get people back in their stores. “The pandemic was a very dark cloud, but there is a silver lining,” he says. “It trained consumers to open up their horizons in terms of styles and choices.” The company is now expanding into the hotel industry with interactive mirrors in lobbies and rooms that allow guests to order room service, explore the facilities or book a show. One of its iMirrors is in use at the Four Seasons in Whistler, and Nobal has just signed a deal with U.S. hotel chain Caesars to provide mirrors for its innovation centre.

Pfizer’s vaccine was the first COVID shot approved in the Western world. But it wouldn’t have gone far without Acuitas, a Vancouver biotechnology company. Using mRNA strands instead of the whole virus allowed Pfizer to develop a vaccine at unprecedented speed. But mRNA is fragile. To protect it, Pfizer turned to Acuitas, which creates highly complex lipid nanoparticles that surround the mRNA like a protective bubble until it gets into the body’s cells. Before COVID, manufacturing a few grams of these nanoparticles was considered an enormous task. To vaccinate the world, two metric tonnes of them are now being produced. This rapid scaling up of the technology opens the path to faster vaccine development, not just for variants of COVID but also potentially against some cancers and other diseases.

Smarter buildings: The end of desk fans and office blankets

BrainBox AI is answering the perennial grumble of office workers everywhere: Why is it always too hot or too cold in here? The Montreal-based startup makes air conditioning systems more efficient by using AI to predict daily temperatures fluctuations around a building and making tiny adjustments to correct them. By integrating internal data such as occupant densities with weather forecasts, BrainBox AI says it can improve workers’ comfort levels by 60 percent while cutting a building’s carbon emissions by 40 percent. Its technology is used at more than 160 sites, including a Holiday Inn in Quebec where it has cut energy use in common areas by one third.

Reimagining home renos: Taking the headache out of finding a contractor

Unable to travel because of the pandemic, half of Canadian homeowners are planning renovations this year, according to Scotiabank. That means about half of Canadian homeowners will be stressed from trying to find a reliable contractor. Bidmii is taking the hassle out of the process. Instead of chasing down the person who once repaired a friend’s deck, homeowners can post details of the work they need on Bidmii’s platform and let contractors bid on the job. Each comes with reviews from other Bidmii users, and the platform won’t release payment to the contractor until the owner confirms the work has been done — meaning there’s much less chance of your home reno turning into a home wreck.

Retiring the resume: The intelligent route to a dream job

There’s a mountain of evidence that traditional hiring based on resumes leaves companies with plenty of square pegs in round holes. Plum is helping take the randomness out of recruitment with a platform that uses techniques based on psychological research to assess an applicant’s personality traits, social intelligence and problem-solving abilities. It then maps them to a company’s available opportunities and highlights the best-fitting candidates for each role. Plum has an eye for matching candidates with their dream job — people hired through the platform are four times more likely to be successful than those picked from resumes alone. Plum’s system is also deliberately blind to factors such as race, gender and disability status, helping make the process fairer for everyone.

Kids lost more than three months of learning thanks to COVID-19. These edtech companies are helping them catch up