Why Buffalo is a natural beachhead for Ontario health startups 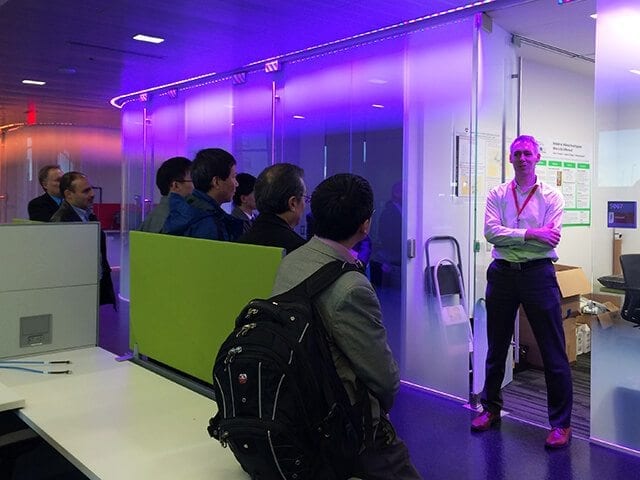 As things currently stand in Canada, selling and adoption are large barriers for local startups. It’s no surprise that many new companies often look to our neighbour, the United States, for alternative routes to new markets.

Buffalo, New York, is only a two-hour drive away from Toronto—and, from there, over 50% of the American population is within a 10-hour drive. This geographic area offers a huge opportunity for startups looking to gain access and capital down South. Buffalo appears to be a natural beachhead for startups in and around the Greater Toronto Area to break into the American market. Buffalo’s proximity, in particular, would serve as the perfect receptacle for Toronto health startups—especially to set up a shingle, or at least a post-office box!

On December 16, MaRS and HTX joined forces to organize a day trip with several Ontario ventures to the innovation campus in Buffalo. Over 20 Ontarians—the majority of whom were entrepreneurs—made the trip across the border to gain more information about opportunities in the area.

Like a ‘MaRS for Buffalo,’ the Buffalo Niagara Medical Campus (BNMC) sits right in downtown Buffalo. It is a non-profit organization that umbrellas a physical collective of clinical care, medical education and research institutions. BNMC also houses The Jacobs Institute (the JI), a non-profit that is driving next-generation technologies in vascular medicine and related neurological diseases, and the Design Innovation Garage (DIG), an affordable co-working space that includes access to mentors, networking events and more. DIG also provides the option of setting up a virtual office with access to all of its programming.

We were given an overview of BNMC and the JI and informed of their business development opportunities for startups. We were also given a tour of their facilities and spaces. For many entrepreneurs, Buffalo can serve as potential site to create a presence in the US. For example, we visited fellow Canadian Niall Wallace at his office in the JI. His company, Infonaut, is a successful example of how a Canadian venture (Infonaut is based in Hamilton) can reap the benefits of having a second office in the States.

By the end of the day, it was clear that this innovation hub in Buffalo could serve to help Ontario health startups with lab/office space and tax incentives, as well as with making strategic connections with investors, clinical staff and patients to help them break into the American market.

The entire event grew out of an October information presentation at MaRS, where we hosted BNMC and the JI. There was an overwhelming demand from startups to find out more about how to work with the non-profits after the session. In response, the organizations offered the exclusive trip and program for Ontario ventures.

We wrapped up the end of the trip with a mixer where Canadians wore red name tags and Americans wore blue ones. This is where the real magic and connections happened, when startups could tell their stories and explain their needs directly to those who could make things happen for them on the other side of the border.

Find out more about the day’s events and what the attendees had to say about it in an article in The Buffalo News.