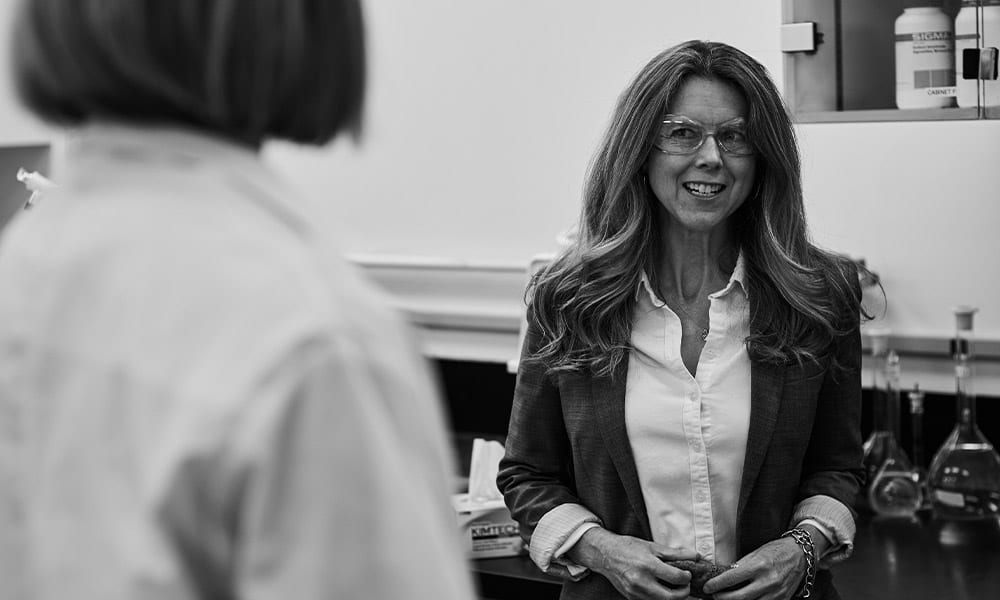 Amanda Hall knows from a statistics perspective that when she pitches to investors, there’s a 98 percent probability they won’t give the money to her. But that hasn’t stopped her from raising millions for her cleantech company.

On March 15, Amanda Hall, CEO of Summit Nanotech, shares how overcame hurdles as an entrepreneur at a special International Women’s Day edition of MaRS Mornings. Register for the event here.

When Amanda Hall started working in the oil and gas sector in Alberta more than 15 years ago, she resolved to dig into the messy bits. “I remember saying to myself, I want to get neck-deep in the problems so I can be part of the solutions in the energy sector,” says Hall. That determination often saw the geophysicist ask questions the industry wasn’t prepared to ask itself — often to the dismay of her colleagues. “I remember saying, ‘hey, you’re not really considering renewables or EV forecasting.’ People around the room turned and looked at me like, ‘what the hell did you just say?’”

Undeterred by what she saw as “wilful blindness” about the accelerating pace of electric vehicle technology and renewables, Hall started to think about how she could get involved. “I knew that the future was not going to be like the past and I wanted to leverage it.”

She quit her job with a big oil and gas producer and, in 2018, founded Summit Nanotech, which has developed a more sustainable method of extracting lithium. “We’re an upgrader,” explains Hall. “We get raw product, update it to battery grade, then give it back to the customer and they sell it to the market.” Summit’s technology reduces climate pollution, minimizes the use of freshwater and chemicals, and cuts waste by 90 percent compared to traditional methods. The company has just initiated its first pilot project in Chile, the first step in commercialization. Hall’s idea — and her commitment to bringing it to market — saw her win the 2021 Women in Cleantech Challenge.

Here, she talks about raising money, why the boss should always be “in the weeds,” and how she forged a future for herself in line with the necessity of a clean energy future.

You worked in oil and gas for well over a decade. What made you turn your attention to renewables?
In 2017, I went on a trip to Tibet, and I was in a monastery at the top of a mountain, and I saw a monk pull a cellphone out of his robe. I couldn’t get that image out of my head and the whole notion of lithium-ion batteries being everywhere on the planet. It opened my eyes to the tidal wave of demand that was coming.

How important was it for you to innovate a more sustainable method for lithium extraction?
Very. I thought about the future: what should we be doing the right way? And I made sure that our technology operated under those thresholds rather than under existing regulations. We’re not just complying with existing regulatory standards; we are blowing them out of the water so that we are future-proofing our own operations.

When I’m marketing our technology to mining companies, one of the first things they say to us is, ‘How much freshwater do you use?’ And when I say none, they’re like ‘what?’. We designed the technology not to use freshwater and to them that’s like music to their ears because they have so many issues with freshwater.

You were working full-time when you came up with the idea for Summit. How did you manage to find the time to come up with a new technology after-hours?
I think it’s because I was single at the time! I had nothing better to do. My Friday nights weren’t going out, they were sitting on the couch with a blank piece of paper and thinking, how do I want to change the future? I was divorced and my kids were 17, 19 and 21 at the time, and in that selfish phase of growth where they don’t care what their mom is doing. There was a power just in being single and focusing on myself and not diluting myself.

Back then I didn’t know I wanted to do lithium. I knew I wanted to do something in the nanotech space because it was so fascinating to me. I’m a geophysicist with a biology degree. I never studied nanotechnology, but I taught myself. I literally sat with scientific journals and articles just reading and reading and reading. I landed on lithium as the future of energy and a nano material that I thought could do a better job extracting than what was already out there.

In earlier interviews you’ve talked about some of the challenges of being a working mother. Did those challenges also spur your entrepreneurial endeavours?
I hated being 9-5 downtown. One of my three daughters went through a really difficult phase of depression and anxiety and going to work every day was torture because I didn’t know how she would cope throughout the day. When I started this company, I wanted it to be different. My staff knows that they can work from home any time — even before COVID. Family First is my number one corporate credo. The hierarchy of my company is inverted: I’m the bottom of the pyramid supporting everyone above me because they need my support to succeed. We don’t report up, we report down.

How have you used the Women in Cleantech $1-million prize money?
The prize money just went so much further in accelerating my credibility internationally as a leading female innovator, and it gave us the funding we needed to bridge our seed financing and our Series A financing round. The money acted as a bridge to keep us afloat. It allowed us to increase our valuation, do the things we needed to do and let us focus more on Canadian lithium. The prize money went a long way. Since I got it, we closed our Series A financing round, we ramped up spending, hired 15 more people. It’s just been a huge accelerator for us.

Right before you won you turned down $10 million from a U.S. investor, which is a bold move for a startup. Why?
The partnership just felt wrong — and that’s when the prize money showed up. I was able to boldly say no to an investment and keep looking for a better one. I ended up landing three huge international giants after that and I couldn’t have done that without the prize money. It kept us from being in a stressful position where I would have had to take any deal, and instead I got to wait until the right deal came to the table.

How much of your job is raising money?
It’s probably 50 percent of my day. I closed the Series A funding round and within two weeks I was talking to Series B investors about a $100 million round because I knew I had to start socializing that concept as soon as possible. I closed the round with a $36 million post-money valuation, and I turned around and said, now I’m worth $200 million pre-money and everyone was like oh, really?! But that’s the boldness you need when you’re in this phase. You go month-to-month, and your valuations rise by hundreds of millions of dollars just by continuing to push the tech, the patents, the leverage, the partnerships, the customers. I remember my mentor saying to me, Be bold. It was almost like it gave me permission to step out of my comfort zone and just do it. I haven’t stopped since that day. Boldness is just part of my daily agenda.

How do you solicit funding and maintain your vision?
So many people say the CEO shouldn’t be involved with the technology development or the business development or the operations. I’m the exact opposite. I’m in the labs, I’m in the pilot unit operating, I’m in the meetings with customers. I think that makes me a better advocate and ambassador of what my company is doing when I go out to raise capital. For me, the secret of success has been staying in the weeds with my team and not getting too esoteric and losing the grounding of what my company is doing on a day-to-day basis.

Do you think women in this sector face greater challenges than men?
I don’t think it’s any different for women from a day-to-day perspective, but the track record isn’t there for us to be successful. In 2021, two percent of venture capital went to women. Two per cent! That’s a horrible statistic. From a statistics perspective when I walk into a room and pitch to investors, I know there’s a 98 percent probability that they won’t give the money to me. I’m fighting against the odds every single day. I’m beating the odds, but I don’t let being female hinder anything I do. Whether I’m talking to mining companies in South America or investors in Silicon Valley, I show up as a knowledgeable, credible experienced scientist. Gender just doesn’t even matter.

It sounds like those dismal investment statistics for female innovators bolster you in way…
It does. It lights my fire. It makes me work harder. I know I have something to prove. I have to prove to the world that women can do this.

Transformation: A rallying cry for the planet