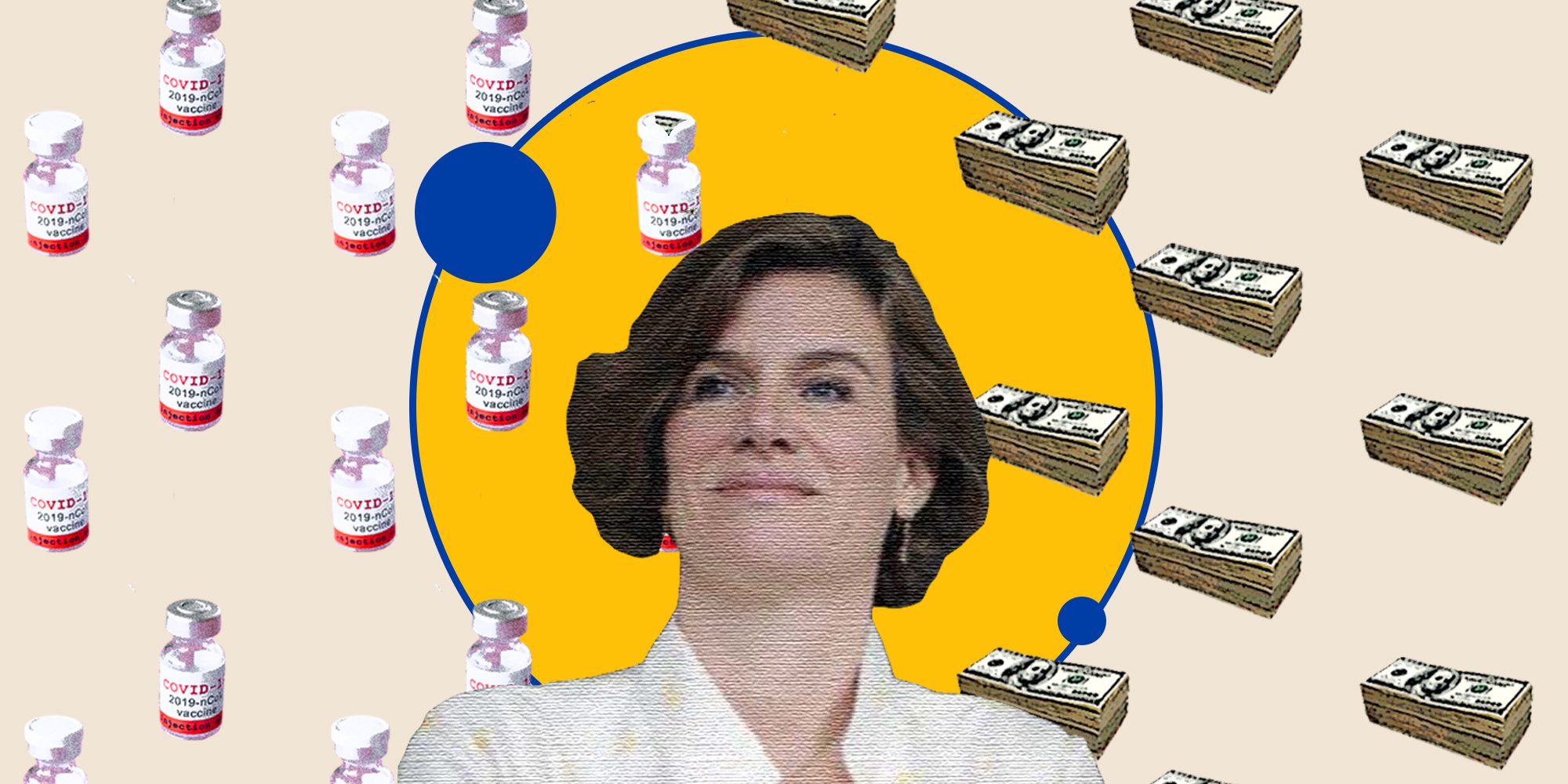 Health innovation has been the story of COVID, but economist Mariana Mazzucato says we’re still not doing it right. We need to redesign procurement, rethink old narratives and reassess the value of public investment.

Mariana Mazzucato is one of the world’s most influential economists — professor at University College London, founder of the Institute for Innovation and Public Purpose and author of books rejecting business’s monopoly on risk-taking and value creation.

“Economics is full of stories,” she has said, and Mazzucato shared some of hers at MaRS Impact Health, in conversation with Molly Shoichet, a Canada Research Chair and startup cofounder who also served as Ontario’s first chief scientist.

Molly Shoichet: The COVID economy has had an outsized impact on women and racialized communities. What is the connection between public health and a healthy economy?

Mariana Mazzucato: We hear it’s important to invest in health, it’s good for the economy. But in my work as chair of the World Health Organization’s Council on the Economics of Health for All, we want to determine the actual goal we’re trying to achieve.

COVID-19 has woken us up to the fact that we don’t have health for everybody. It’s not enough to have a vaccine if not everyone has access to it. So, if our ambition is health for all, how do we set up our economy? Outcomes-oriented budgeting? Procurement processes and budgets?

NASA was very clear that its goal was getting to the moon and back, but it kept the “how” very open — it redesigned procurement to allow for all kinds of innovation along the way.

Shoichet: COVID has focused governments on tangible public health outcomes. What are some examples of jurisdictions leveraging and pivoting resources in ways that will last beyond the pandemic?

Mazzucato: I co-authored a report with Achim Steiner, head of the United Nations Development Program, about Vietnam and Kerala, India. They did quite well during the pandemic because they made investments within state institutions and fostered dynamic partnerships with the private sector and civil-society organizations, on the back of previous crises like the Nipah virus outbreak.

Unfortunately, there’s been a lot of outsourcing of government capacity elsewhere. In the United Kingdom, we have overly consultified our government. Lord Agnew, a Tory government minister, described Britain’s overreliance on Deloitte, PWC and McKinsey as “infantilizing.”

We need consultants and public-private partnerships. But you don’t outsource your brain, your capacity to govern and manage. Any organization responsible for creating value in the economy needs to be thinking of its own dynamic capacity, but COVID has often shown us we don’t have it. We did badly in delivering personal protection equipment to frontline workers, in developing contact tracing systems, in providing remote tools for students, in vaccines. It’s not enough to have them — you have to govern them for the public good.

These are wakeup calls for investing in our ability to govern. This includes the private sector, which has been obsessed with maximizing shareholder value. You’ve had companies like Pfizer and Exxon spending a huge amount of profit to buy back their own shares and boost stock prices, stock options and executive pay. This lack of reinvestment in the economy is a huge problem.

Shoichet: How do we balance innovation versus accessibility in health care? Especially in domains like therapeutics, where the cost of bringing a new treatment to market is a billion dollars or more. How do we incentivize innovation while ensuring that treatments are priced for broad accessibility?

Mazzucato: In The Entrepreneurial State, I looked at how we often use the wrong narrative for where innovation actually comes from. Private-sector investment is very important, but the way we frame the role of the public sector has often been just about fixing market failures. That dismisses the massive amount of risk-taking and investment governments have made in areas like the digital economy, nanotech, biotech, pharmaceuticals and now clean technology.

It’s extraordinary how much public investment gets made in the early, high-risk, capital-intensive phase of drug innovation. The United States, which pretends to be a model of capitalism, actually keeps a very visible public-sector hand in this. The National Institutes of Health invest more than $40 billion a year in health innovation. They’ve been doing it since the 1940s.

If we don’t have a narrative about public investment, prices won’t reflect it. If we pretend that it’s all private and the public sector is just there to fix market failures, invest in basic research, do a bit of regulation and get out of the way, we don’t capture collective risk-taking.

If we did, our pricing models would be very different from the current value-based models. That’s the technical term, “value-based pricing,” which basically just allows prices to go to what the market will bear. Welfare states might come in and subsidize some of it, but we need to get prices right in the first place so taxpayers aren’t paying two or three times for innovation. The U.S. government can legally apply march-in rights on the prices of drugs they’ve contributed to. But they’ve never actually implemented those rights, which shows that there’s a confidence problem.

The second issue is intellectual property rights. I’m not against patents, but we need to make sure they’re structured toward common-good objectives. Patents are a contract between state and business for 20-year monopoly profits. Once the patent expires, there is diffusion of the knowledge across the economy. But only if patents are structured to enable it. If they’re too wide, the knowledge gets blocked. American economist William Baumol called it unproductive entrepreneurship.

We need to make sure drug prices reflect that collective contribution, and we also need global solidarity. We can’t just rely on charity, like the Group of Seven agreement to donate one billion vaccine doses when we need 11 billion.

Shoichet: How can we ensure vaccines are equitably available around the world?

Mazzucato: I think we need to really question whether vaccines should be produced in a for-profit model. With the pandemic, unless vaccines are available to everyone, we’re all going to remain unsafe. Otherwise we have vaccine apartheid, as WHO Director-General Dr. Tedros Adhanom Ghebreyesus calls it.

There is this idea of having a patent pool — we have to rely less on voluntary charity. Governments and philanthropies can also use prizes to encourage certain types of inventions. We don’t just have to rely on patents and pricing, especially in an area with such a strong “public good” dimension.

There’s also the concept of collective intelligence. One example is the “people’s vaccine” concept promoted by the Costa Rican government and others. And there are people like Dr. Tedros who are asking how we share knowledge, how we construct collective intelligence about tools and therapies in a pandemic, how to structure public-private partnerships.

What’s so interesting about the American model is that it’s mainly been applied to wartime scenarios. In my book, I talked about how urgently the U.S. government saw the space race. They put the full weight of government behind the Apollo program and were very clear that it required a change in procurement practice. They moved it away from a cost-plus model toward a fixed-price model with incentives for innovation and quality improvement. They also had a clause restricting excess profits; NASA wanted to share the rewards of its investment. We don’t have that today. The space race is becoming a playground for billionaires to do run pet projects on the back of a huge public infrastructure.

When the U.S. Defense Department invests in health, it’s much more careful to make sure that the contracts with pharmaceutical companies are mutualistic. They make sure that the soldiers on the ground actually have access to the medicines the department helps to fund. Somehow, this has been forgotten at the Health Department.

Mazzucato: In a system that confuses price with value — the thesis of The Value of Everything — we assume that just because someone is paid a lot, they are more valuable. This is why Lloyd Blankfein, CEO of Goldman Sachs, had the guts to say after the financial crisis that his workers were among the most productive in the world. We laugh at that, but in a way, he was right. Because when we look at productivity in terms of output per labour, we don’t know how to value the output of public health workers. Their output might end up being free to the consumer, so we can only put a number on their inputs.

That’s why it comes back to storytelling. We talk about public investments in health — which means expenditures and costs. That feeds the austerity mindset; already there’s talk about the COVID deficits. But austerity is what made the pandemic much worse than it had to be.

We must value the work of women, caregivers, public health workers, school teachers, in such a way that validates them and the value of their labour. It goes beyond their incomes to the value of the output. GDP doesn’t include the value of a well-structured public education or health system because it’s free. It’s absolutely mad if you think about it. We currently just look at the cost of the teachers or the nurses.

In economic theory, we currently assume that value is only created in business — that the public sector only facilitates or enables or fixes things. We need a theory and narrative for value created collectively.

Want the MaRS magazine delivered to your inbox?
Sign up to our newsletter and never miss a story.