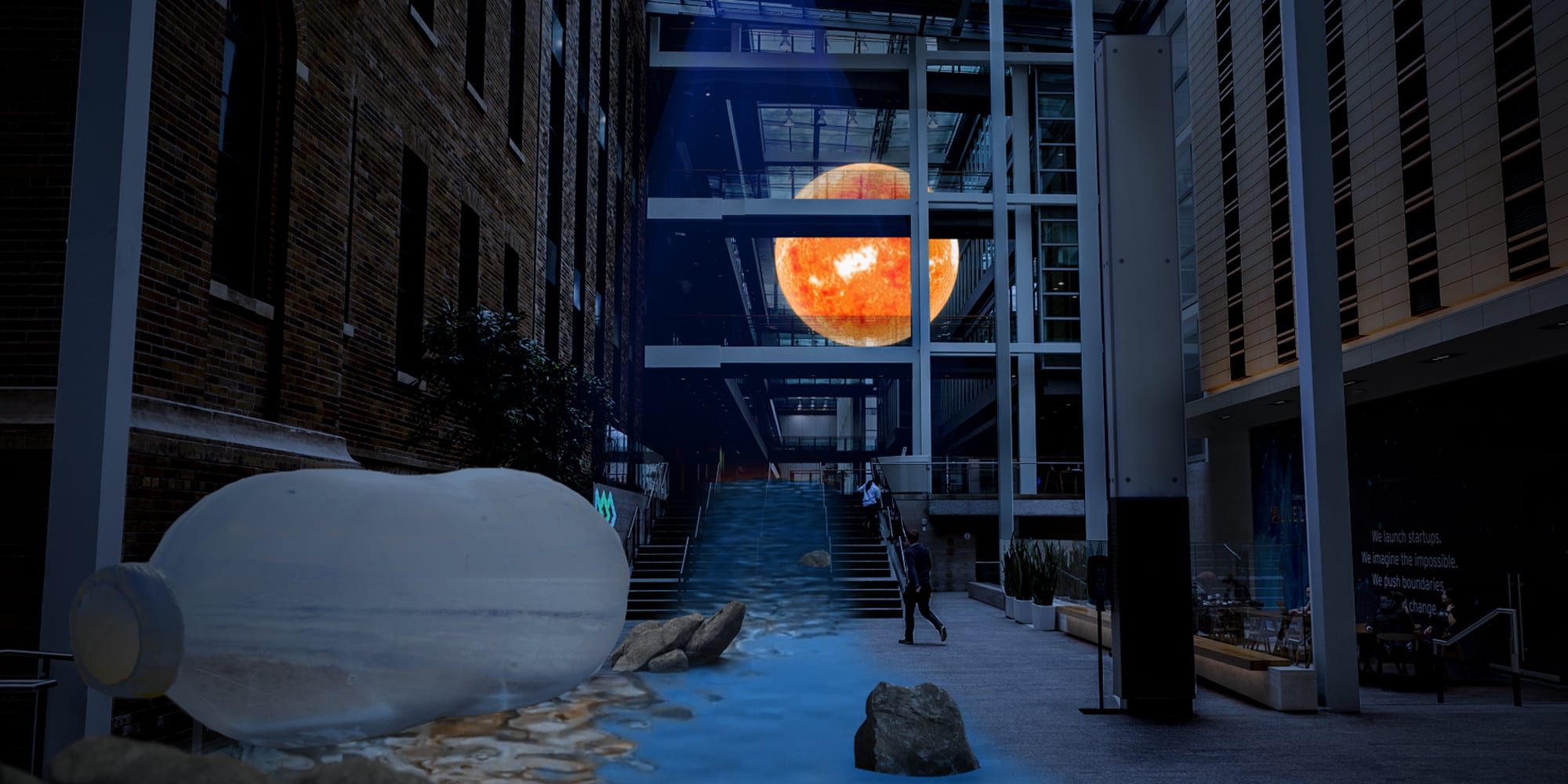 Despite popular belief, the arts and sciences are more cousins than contradictions. Both disciplines are unique expressions of human curiosity; both seek to describe and understand the world around us. And while technology has never been more powerful and ubiquitous, there remains a growing consensus that the tech sector will require a potent injection of the arts and humanities if it hopes to be fair, diverse and, indeed, human.

This Oct. 5 in Toronto, art will meet science at many of the installations during Nuit Blanche, an all-night arts festival taking over the streets of Canada’s largest city. This year, MaRS is honoured to join the festival and open its doors to the community, offering a multi-sensory interactive exhibit centred on the topical theme of climate change.

From the Discovery District to Yonge and Dundas to Toronto’s City Hall — here are five must-see Nuit Blanche exhibits in the downtown core.

Housed in the soaring MaRS Atrium, Transformation is a rallying cry for our planet — a sobering look at today’s greatest environmental threats, and a hopeful vision of a sustainable future. Wade through a ravaged river; be dwarfed by giant plastic sculptures; stare up at a blazing sun; and stroll through a 21st-century Eden, bathed in technicolour LED light. Transformation includes 3D projections, super-sized sculptures, short films, and special contributions from author Margaret Atwood, and Grammy-Award-winning producer Daniel Lanois.

Have you ever walked inside a 25-foot-high shard of cracked ice in the middle of the Canada’s busiest square? Well, now you can. In this stark yet beautiful work, art collective Ghost Atelier draws the connection between the world’s diminishing ice caps and the “narrowing future of humankind.” On Thin Ice demands that audiences bear witness to the fragility of life in the face of climate change.

Artist Kristine Mifsud wants people to think deeply about space — its heavenly phenomena and the clues it offers about the origin of existence. With space time, Kristine shares a new kind of odyssey: a silent projection of her 12-hour Internet search for cosmos-related photos and videos. From the OSIRIS-REx mission to walking on the surface of the Red Planet, this piece reminds viewers that our greatest scientific and philosophical mysteries are, indeed, rooted in the stars.

Like the eye of a hurricane, Daniel Arsham’s Lunar Garden offers complete serenity in the middle of an otherwise wild night. The installation is the largest of Daniel’s Japanese-inspired gardens, complete with a 30-foot glowing moon, playful sculptures and immaculate rows of coloured sand. Loaded with clashing motifs of permanence and impermanence, Lunar Garden is accompanied by an original soundscape by Toronto musician Charlotte Day Wilson.

Among All These Tundras

One of the regions most plagued by climate change is the Arctic, pillar of Canadian identity and home to numerous Indigenous populations. Hosted at OCAD University, Among All These Tundras is a travelling international exhibition showcasing the culture and concerns of the circumpolar world. Visitors will see works — some bleak, some humourous, some inspiring — from Canadian, American and Scandinavian artists and, more importantly, reconsider their responsibility to protect Northern life and land.

Are you an art lover? Visit Portraits of Innovation, a photo series from Christopher Wahl celebrating Ontario’s diverse tech leaders.

How Sociavore is helping out the restaurant industry