Tech solutions that can shrink the carbon footprint of cities 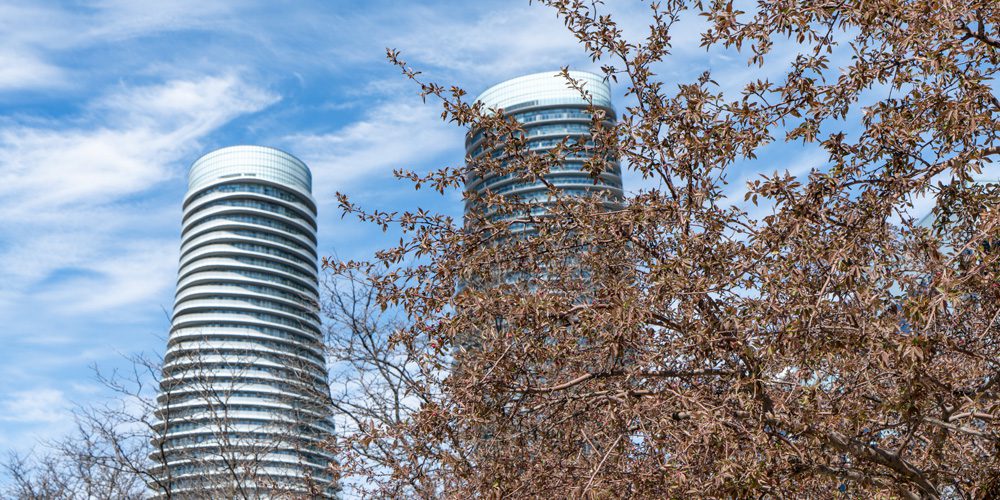 Buildings, roads and sidewalks generate almost half of all global greenhouse gas emissions. Here are some Canadian companies working to fix that.

When you think of the climate crisis, there’s no end to the apocalyptic imagery that immediately comes to mind: rampaging wildfires, drought-stricken prairies, highways paralyzed by flash flooding.

But one of the greatest contributors to climate change is also one of the least visible — our very homes and office towers, our roads and bridges, even our sidewalks.

The elements that comprise our built environment, in fact, generate almost half of all global greenhouse gas (GHG) emissions. In Canada in 2020, buildings were responsible for 87.8 megatonnes of CO2, or 12 per cent of our total emissions. “Canada’s got the highest per capita emissions of a G20 nation,” says Kelly Alvarez Doran, an architect and University of Toronto professor who studies how to cut the emissions from buildings. “And that has so much to do with how we live and how we’ve constructed our built environment.”

To make matters even trickier, our built environment produces emissions in two different ways. There are those generated by a building’s operation (its heating, cooling and lighting) and those created by so-called embodied carbon — the CO2 associated with the materials and construction processes used throughout a built form’s life cycle.

It’s relatively simple to reduce emissions in new buildings using the latest materials and systems. It’s not quite so straightforward, however, in existing buildings and infrastructure. New energy codes, say, could require triple-glazed windows, but the emissions created by the demolition of old windows and the creation of new ones may not result in a net CO2 reduction.

Given this complexity and the dizzying array of forms, processes and materials that make up our built environment, an equally dizzying array of solutions are being pioneered by Canadian firms — from new mass-timber buildings such as George Brown College’s Limberlost Place to smart software programs that optimize energy efficiency.

Companies in this space tend to fall into two categories: those developing alternative building materials and methods, and those who specialize in retrofit solutions. The first include companies like Vero Solutions, which uses a modular approach to building highrises that has a smaller environmental footprint than conventional construction, and Pliteq, which recycles car tires into building materials.

Doran argues that all new buildings can be constructed using low-carbon insulation, cement and floor sealants, which are readily available. “There’s so much low-hanging fruit,” he says. “In your average building, you could make 30 to 40 percent reductions.”

One of the most compelling alternative materials comes from Etobicoke’s Mitrex. CEO Daniel Hadizadeh, an engineer who specializes in building cladding, had become increasingly frustrated by the solar energy being wasted on the buildings he supplied. In 2015, he began to research building-integrated photovoltaics (BIPV) — essentially, solar panels that are integrated into a building’s structure, transforming the building into its own energy source. The technology had existed for years, but Hadizadeh quickly learned that it was expensive, and the available products were of limited size, colour and scale.

He started Mitrex to fill that gap. The company now produces a wide array of customizable solar panels, facades, siding, roofs and railings, which have been used in everything from condos to highway noise barriers.

One of the company’s most high-profile projects is a 7,000-square-foot solar wall in a retrofitted industrial building near its headquarters. The largest such structure in North America, it can generate 100,000 kilowatt hours of power a year, supplying all the electricity the building needs. (For comparison, as of 2019, the average Ontario household used about 8,250 kilowatt hours a year.)

“We’re trying to make a difference,” Hadizadeh says. “Trying to do things better than what our fathers have done. Not repeating the same mistakes over and over.”

Retrofit solutions, meanwhile, have been developed by companies like Vancouver-based Miru, which makes “smart” windows for buildings and cars that lower energy usage, and Feedback Solutions, a Burlington, Ont.–based manufacturer of systems that can immediately improve the efficiency of existing heating and cooling systems without costly or lengthy renovations.

Feedback’s system uses heat sensors to track occupancy, and automatically adjusts the heating, cooling and ventilation to optimal levels. That optimization can lower a building’s energy costs by up to 40 percent.

“You can reduce your GHG emissions next month if it’s the right setup,” says Karen Smith, the firm’s chief marketing officer.

The pandemic, of course, has made such nimble technology even more vital, with workplaces, classrooms and airports all now occupied by fluctuating populations.

“There’s a collision right now of two major issues,” Smith adds. “We have climate change, and we have a great concern for indoor air quality. You don’t want to over-ventilate and create needless GHG emissions and the ever-increasing energy bill that goes with them, but you don’t want to under-ventilate because there’s great sensitivity to that, too.”

All of this innovation has been spurred by dramatic shifts in policy and a rapidly growing market. In 2019, the World Green Building Council called for a 40 percent reduction in carbon associated with building and infrastructure projects by 2030, and a year later, Vancouver became the first city in North America with a climate emergency plan that included that same target.

New York City, meanwhile, passed North America’s most aggressive legislation, requiring many buildings to reduce emissions by 40 percent by 2030 or face stiff financial penalties. The latest, tougher version of Toronto’s Green Standard for new construction doesn’t go quite as far, but it does include, finally, new voluntary tracking requirements for carbon.

The Toronto Green Standard is not just limited to buildings, it also aims to improve air quality, enhance the urban forest and better manage stormwater — an increasingly critical task given that climate change has made rainstorms more severe and unpredictable. An early-stage startup called Curb the Rain has come up with an ingenious idea to combat such weather events — redesign existing curb infrastructure with permeable concrete.

During flash flooding, curbs could then temporarily capture rainwater before letting it drain into existing stormwater systems. Curb the Rain was founded by four U of T Mississauga sustainable management students, and the group won first prize last year at Rain It In, a student competition dedicated to climate change solutions.

It’s still very early days in the group’s design, with Curb the Rain currently exploring 3D printing opportunities at the Hatchery, U of T’s startup incubator, and other university organizations that help bridge the gap between research and financing. “There are lots of strings we’re trying to pull,” says CEO Tina Elliott, an industrial engineer. Even at this stage, though, she’s very excited about the potential of their technology. And, indeed of the entire sustainable construction field.

“What gives me hope,” she says, “is that people are coming up with innovative ways to do things in a completely new industry or in traditional industries that are starting to realize it’s time to do something different.”