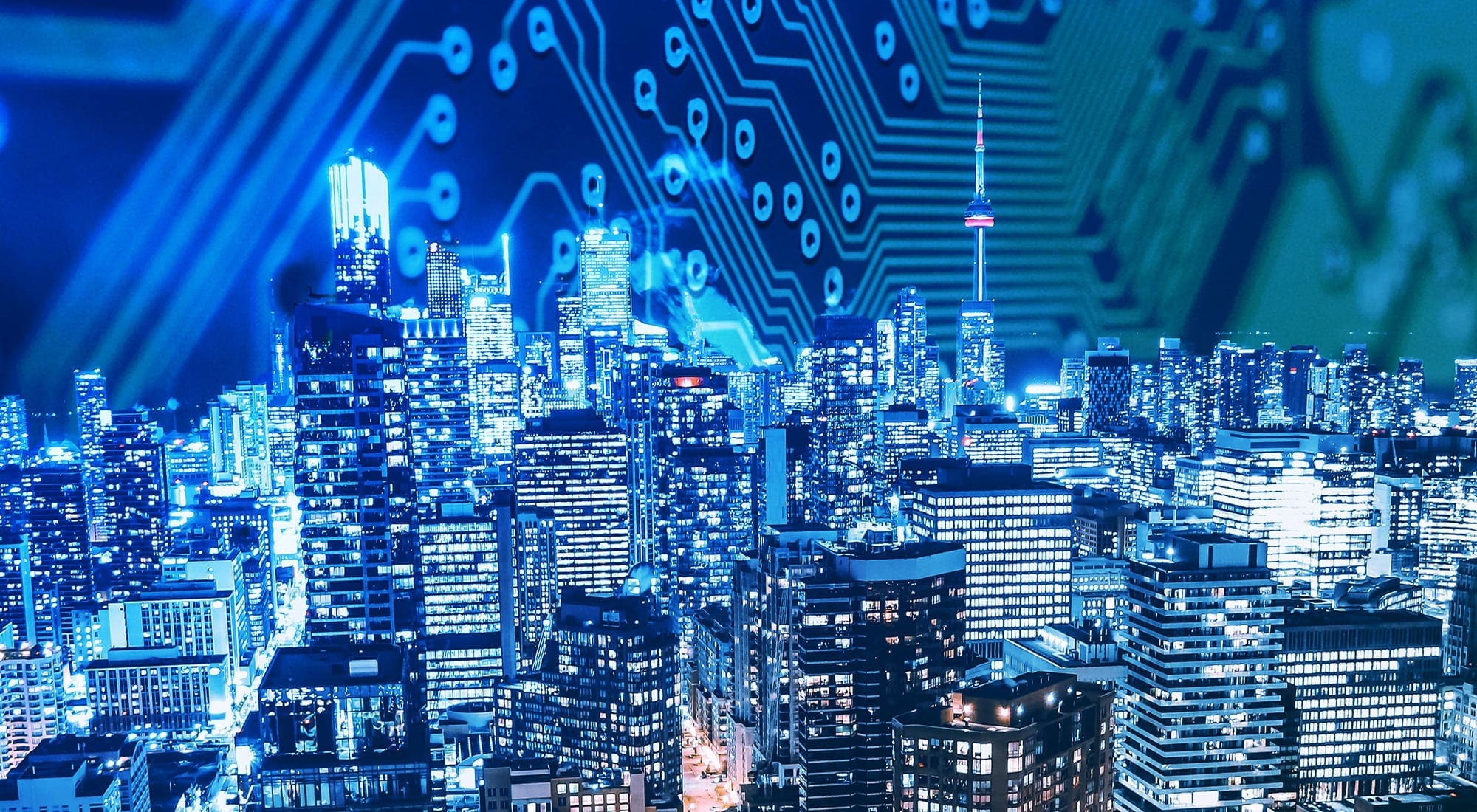 When we talk about the benefit of diversity to our society, we often speak in general terms. But spend time with the entrepreneurs fueling the remarkable surge in artificial-intelligence (AI) research and development now taking place in Toronto, and the benefits of diversity become apparent in concrete form.

At a recent University of Toronto Rotman School of Management event showcasing business opportunities associated with the latest advances in AI, I saw venture demos from dozens of promising startups, all amid a crowd that was strikingly diverse even by Toronto standards. These things are awkward to quantify. But here’s a random sequence of attendee surnames based on a scan of ID cards at the reception desk: Adejuwon, Ehrsam, Conde, Pal, Lepshokova, Dhamani, Kurian, Ing, MacGregor.

Of course, the Canadian technology sector has been benefiting from diversity for generations. When I was doing postgraduate work at McGill’s engineering department 25 years ago, my closest collaborators were recent arrivals from Iran, Turkey, India and China. In some cases, it was pointed out at grad seminars (in good humour) that I was the only Canadian‒born engineer in the room.

But in too many cases, these colleagues would return to Asia or the Middle East to pursue careers as professors. Or, if they stayed in this country, they sometimes would have difficulty moving beyond narrow roles as research specialists. At the time, career development within science, engineering and information technology was still dominated by legacy tech companies struggling to get past old-fashioned attitudes.

A generation later, everything is different.

Modern employers increasingly recognize the value of a diverse workforce. The sons and daughters of the immigrant scholars I collaborated with in the 1990s typically have broader, deeper networks (in part because of today’s more collaborative approach to teaching science, technology, engineering and math), making it easier to bring their science into the market.

This pattern is playing out across Canada, with centres of AI excellence developing beyond the long shadow of Silicon Valley in Montreal, Ottawa and Edmonton, as well as in Toronto.

However, Toronto’s status as a larger and especially diverse city presents a special advantage that has led to a virtuous cycle: the city’s brand helps to attract experts from other countries, who in turn help to lure in yet more talent.

“One of our advantages is that Toronto is simply a great place to live,” says Richard Zemel, a computer science professor at the University of Toronto and the research director of the new Vector Institute for Artificial Intelligence. As The New York Times recently reported, experts in the AI field can command salaries upwards of $300,000 US in a fierce global market. And Zemel often finds himself face to face with candidates who just as easily could decamp to Carnegie Mellon University in Pittsburgh, or the Berkeley Artificial Intelligence Research Lab in California.

Sometimes, geography acts as a trump card: “When I’m recruiting new talent, one of my big selling points is that Toronto is simply a fun, lively place to work and live.”

Toronto is still dwarfed by Silicon Valley when it comes to leading the digital revolution more broadly — especially when it comes to enormous, well-established brands such as Apple and Facebook. But the nature of AI technology allows relatively small companies to create highly profitable, technologically ambitious projects. Many of those companies are putting down roots in Toronto.

Diversity is key, both in coding and research

And while abstract issues such as diversity and inclusion may seem removed from the nuts and bolts of AI coding, Zemel’s own research suggests otherwise.

While he spends much of his time working on core mathematical issues associated with AI, he also now is focusing on ensuring that new technologies exhibit what he, in one research paper, calls “algorithmic fairness” — so that machine-learned algorithms do not unconsciously embed racist or sexist suppositions into “the setting of insurance rates, the allocation of police, the targeting of advertising, the issuing of bank loans, the provision of healthcare [or] the admission of students.”

Many of the brightest stars in AI are young, with careers that began during the current AI boom. (At the Rotman event, I spoke with DarwinAI founder Alexander Wong. When I mentioned that he looked quite young, his colleague Mohammad Javad Shafiee politely responded that Wong already has published more than 400 refereed journal and conference papers in computational imaging, AI and related fields. Moments like this happen all the time in this field.) But some veterans I spoke to stressed that today’s success began with far-sighted policies implemented decades ago. 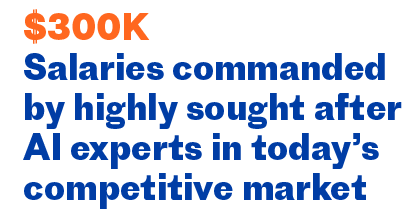 According to Philippe Beaudoin, co-founder of Montreal-based Element AI, the Canadian Institute for Advanced Research is “one of the big reasons Canadian researchers developed expertise.”

A small organization that most Canadians probably have never heard of, “CIFAR encourages networks of researchers on high-risk, high-reward ideas, even if the ideas have no immediate payoff,” Beaudoin says. “In the case of [AI], some of these projects were cutting against the grain of the academy, where there was a lot of skepticism of this technology.”

“It’s also a great example of why this kind of diversity — diversity in research — is also important,” he adds. “Government shouldn’t just fund one set of projects. You have to invest in a lot of different fields, because you never know. And if Canada is going to keep its AI advantage, we’re going to have to keep investing in fundamental research, and in our students, and in making sure our companies are early adopters of the latest technology. That doesn’t mean just developing tech, but applying it, too.”

To understand why the last five years have been a particularly exciting time in AI, and why Toronto has found itself at the centre of it, there’s no better source than University of Toronto professor emeritus of computer science Geoffrey Hinton. He is a legend in the field, thanks to his pioneering work in our understanding of neural nets, which comprise the basis for modern forms of what now is known as “machine learning.” Hinton has been working in the field since the 1970s. But it wasn’t until the mid-2000s that computer hardware was sufficiently advanced to perform the trillions upon trillions of iterative computations required to implement his models. 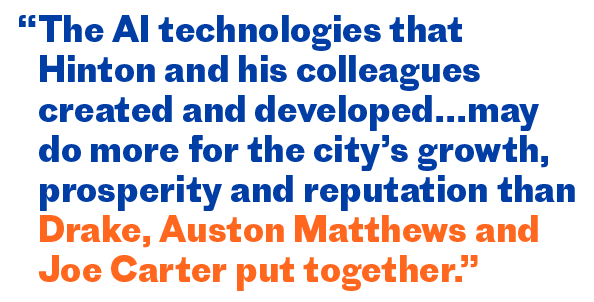 In 2006, he and Ruslan Salakhutdinov, a University of Toronto colleague at Carnegie Mellon since 2009, led a scientific breakthrough that opened the floodgates to many of the machine-learning applications we now take for granted, such as accurate speech and image recognition. For non-specialists, it’s difficult to understand the significance of this moment. Suffice it to say that their ground-breaking work, summarized in a Science article titled Reducing the Dimensionality of Data with Neural Networks, helped to solve one of the foundational problems associated with many neural networks.

“People were tremendously excited,” Hinton recalls. “But there were no big major practical breakthroughs until it became implemented in speech-recognition. You may remember in 2012, when suddenly Android software could understand you much better. A lot of that technology pretty much came right out of the work my students did right here at the University of Toronto. And it showed that neural nets were the way to go for speech recognition — and a lot of other things, too.”

It was an amazing moment in Canadian science, even if it was not widely lauded as such at the time.

Hinton, who had been proselytizing neural nets for three lonely decades, all at once saw his brainchild being put to use in technology contained in gadgets that billions of people around the world carry in their pockets.

Now 69, Hinton is still at work, developing new neural-network technologies aimed at further streamlining and improving machine-learning processes. Among his colleagues at the University of Toronto and the offices of Google (he splits his time between the two), he is an intellectual celebrity. Yet, when he steps outside for lunch, few Torontonians recognize him.

Which is ironic, given Toronto’s historic obsession with its place in the pantheon of “world-class” cities. For, in the long run, the AI technologies that Hinton and his colleagues created and developed at the University of Toronto may do more for the city’s growth, prosperity and reputation than Drake, Auston Matthews and Joe Carter put together.