Regenerative medicine and precision treatments are allowing us to live longer while still living well. 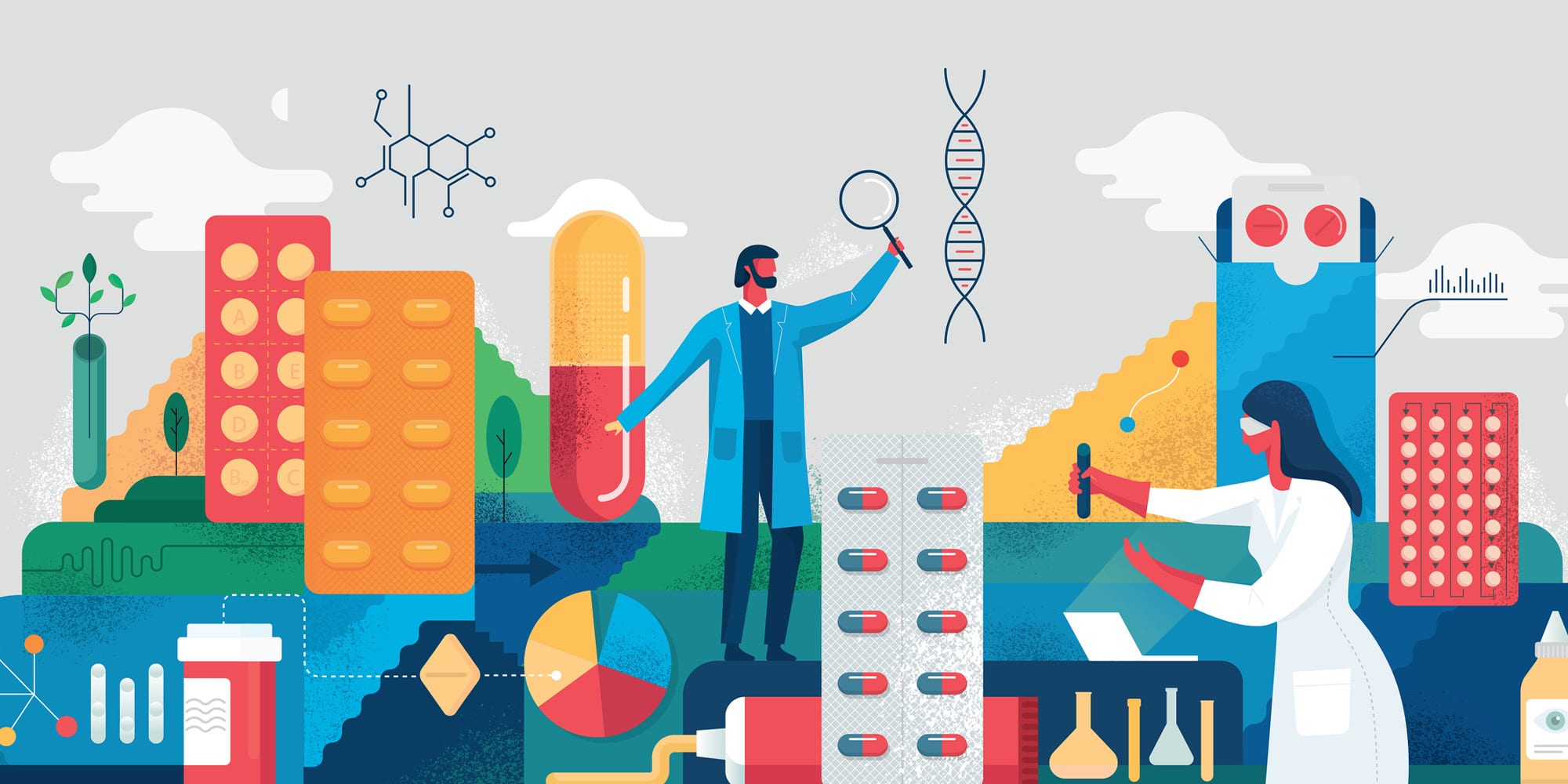 Half a millennium ago, the legend goes, the conquistador Juan Ponce de León set sail to find the Fountain of Youth. (He happened, instead, upon Florida.) Léon’s objective may be apocryphal — he was more likely just looking for gold — but that doesn’t make it any less understandable. As the pandemic throws our world into disarray, it has underscored too how life is achingly short, and we’d all be grateful for more time on this planet. Now, science is stepping in to achieve what that mythical spring only promised: allowing us to all live longer while still living well.

In 2006, biologist Shinya Yamanaka developed a momentous (and Nobel Prize–winning) technique to march an adult skin cell back in time to behave as an embryonic stem cell. In that earliest state, stem cells are pluripotent, which means they can generate into any cell in the body, capable of being dispatched to the eyes or the liver or the spine. Regenerative medicine is now on track to address everything from repairing heart damage and treating burns to combatting osteoarthritis and controlling multiple sclerosis — and those are just the current trials in Ontario.

Around the same time as Yamanaka’s breakthrough, precision medicine pushed treatment beyond a one-size-fits-all approach. Doctors are able to develop treatments that best serve the individual, taking genetics, lifestyle and environment into consideration. (Good news, given that women are still substantially underrepresented in clinical trials, which also happen to skew an eye-popping 86 percent white.) And in 2012, CRISPR’s gene-editing techniques offered the fastest, cheapest, easiest way to manipulate DNA, with the potential to snip away diseases one by one. Last February, the first in-person U.S. trial showed that cells edited to turbocharge the immune system can safely be infused in cancer patients.

These technologies “let us, for the first time, consider cures for chronic diseases, as opposed to just treating the symptoms, and that’s transformational,” says Dr. Michael May, president and CEO of the Centre for Commercialization of Regenerative Medicine (CCRM). Cenetenarians are Canada’s fastest growing age group: today, more than 10,000 people have reached 100, and 40,000 are projected by the middle of the century. With advances in medical research, May believes we will see people reaching 110 years old. “Importantly, regenerative medicine will enable people to live to that age with higher functionality and better quality of life,” he says.

Drew Taylor co-founded Acorn Biolabs in 2017 to help patients take advantage of what these new technologies could offer. “I saw a future with something like 3D-printing a heart on demand from your own cells, but unfortunately, an older individual’s cells would no longer have the therapeutic capacity for them to benefit,” he says. “Scientists are working to treat these diseases, so let’s get patients to bank their cells now and prepare for this amazing bright future.” The biotechnology company collects a few follicles of plucked hair, which are a surprisingly formidable source of cells. Those cells are then plunged into liquid nitrogen, where, frozen at -190˚C, they won’t age or accumulate damage until they’re called back up for use. “You’ve really locked in a piece of yourself in your best possible health,” says Taylor. “And you’re empowered to live the longest and healthiest life you can.”

It’s no great mystery which diseases complicate our plans for that long, healthy life. Still, heart failure, cancer and Alzheimer’s all pose a risk. So, healthcare companies are finding ways to tackle the intractable. Blue-Rock Therapeutics, which launched in 2016 and now boasts a roughly $1-billion investment from pharmaceutical company Bayer AG, transforms healthy donor cells into stem cells that can then be widely adapted. BlueRock is in trials to use manufactured brain cells to rebuild the neural circuits in Parkinson’s patients, and is looking at engineering nervous-system cells to help with broader neurodegeneration. Their lead cardiology program is also currently creating cardiovascular cells that could treat degenerative heart disease.

Until cancer is eradicated outright, precision oncology makes a tangible difference for the one in two Canadians who develop the disease over the course of their lives. “The traditional pathology test is to test for potential gene A, wait a week, then if that comes back negative, test for gene B, and so on — it’s time-consuming and requires a lot of samples to run multiple tests,” explains Dr. Xue Wu, co-founder of Geneseeq, a molecular diagnosis company for cancer genomics. Geneseeq is able to build a mutation profile for 500 genes from one sample in five days. Once the mutation has been identified, Geneseeq will flag every approved drug, appropriate clinical trials and relevant cancer research available for it. Liquid biopsies can also detect what sort of new mutations a tumour has acquired — handy once it develops drug resistance — and perform dynamic monitoring to see if a removed tumour has come back.

Geneseeq, Acorn and BlueRock all want to extend patients’ lifespans — to see them not just hitting the century mark but cruising comfortably, and healthily, past it. But there’s an awareness that doing so has social and economic implications; after all, when the Canada Pension Plan took effect in 1965, average life expectancy hadn’t yet cracked 72 years. May concedes there’s a potential for people to take advantage of science that course-corrects for quality of life. “If you can get a new liver whenever you want one, well, why not drink a lot? Why take care of yourself?” he asks. “There are flip sides to the promise of treating chronic disease.”

As Canada’s abysmal record of protecting nursing-home residents from COVID-19 makes clear, there’s an urgent need to reform our approach to elder care. And, according to the Canadian Medical Association, there are only 304 geriatricians across the country — and just one each in the entire provinces of Newfoundland, Prince Edward Island and Saskatchewan. “There aren’t enough of us,” says geriatrician Dr. Paula Rochon, who’s also the vice president of research at Women’s College Hospital. But although additional old-age specialists would help, she says it’s more important to ensure all healthcare professionals get the right education. “We need to think about how we train a whole workforce,” she says, “because everyone will find themselves working with an older population.”

Back in the 16th century, the tale of Juan Ponce de León’s adventures in longevity was promoted by a Spanish historian who didn’t like the guy and sought to discredit him — after all, who’d really believe in a Fountain of Youth? The idea doesn’t seem so foolish now. Advances in medicine are challenging our ideas of what getting older looks like, and the technology similarly shows no sign of slowing down. “The science is really evolving quickly,” May says. “This is absolutely an industry coming of age.”

Health tech companies that are changing what it means to get older.

How: Turns out hair follicles are an excellent source of skin cells. At its lab (or through at-home kits sent in for processing), Acorn collects hair strands, separates out the viable cells and preserves them in liquid nitrogen until they’re needed — at which point, they can be converted into pluripotent stem cells and dispatched to any task.

How: Healthy donor cells are reprogrammed into malleable stem cells for a master cell bank. BlueRock then uses cell-differentiation technology to create cells suited for neurology, cardiology and immunology. That means they can replace damaged or degenerated tissue, which could help restore or regenerate whatever function has been lost.

What: Molecular diagnosis in cancer genomics

How: Next-generation sequencing (NGS) technologies break the genome into tiny fragments, which are easier to sequence in a single experiment, letting Geneseeq build a mutation profile for 500 genes in five business days (rather than testing one gene at a time over weeks or months). They then report back what mutation a patient has, what drugs are available, or which clinical drugs target the mutation.