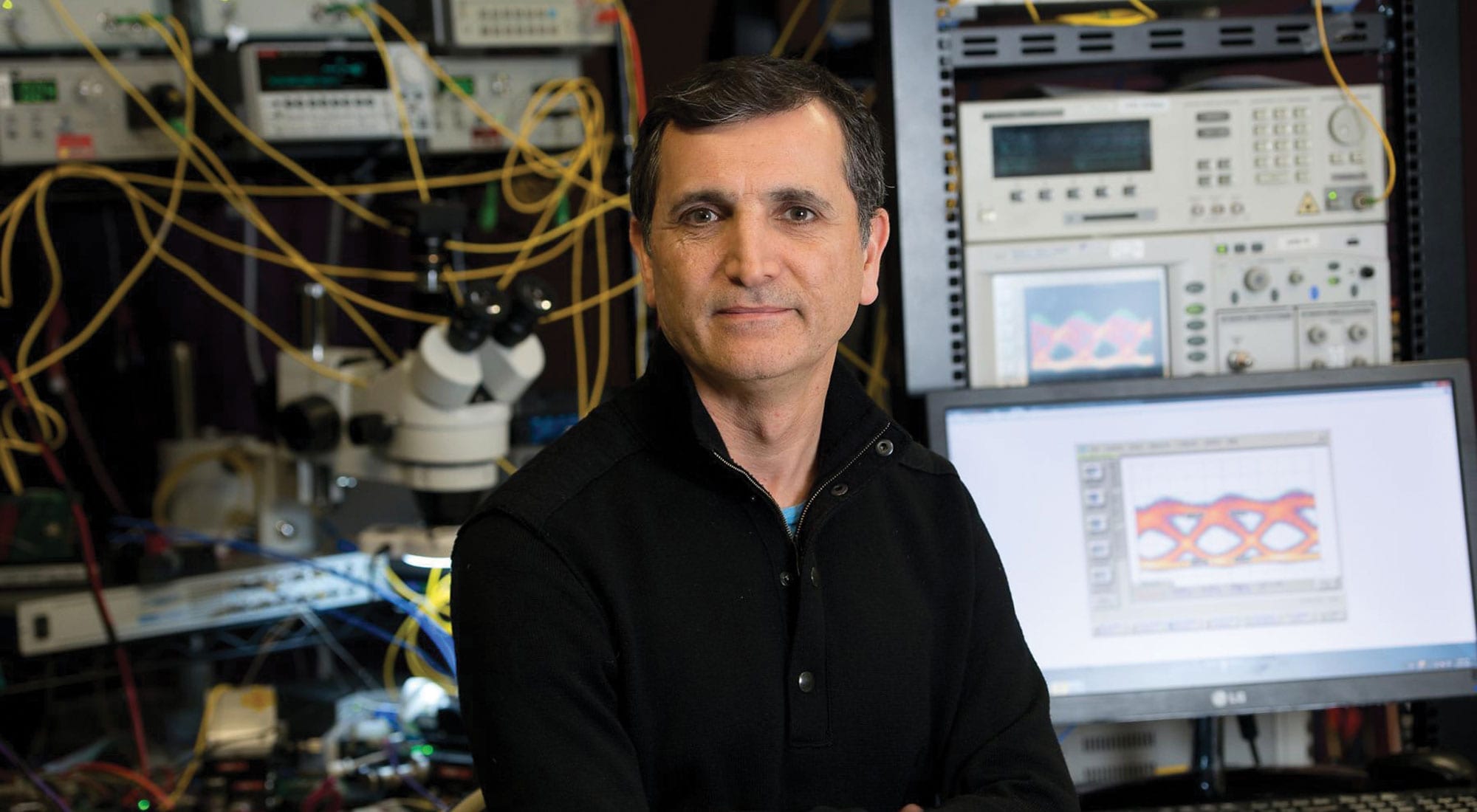 Data (facts and statistics collected for analysis) is increasingly important to business growth. In fact, 90 per cent of all data ever collected was generated in the last two years. Connecting and understanding data related to people, platforms, the Internet and supply chains (and most importantly, turning it all into profitable insights) is crucial when achieving competitive advantage. The sheer amount of information and variables to consider can be overwhelming. That’s where nimble, data-focused startups come in. These companies help clients make the right business decisions, share data efficiently and increase effectiveness.

In his years as an angel investor and VC, Raymond Luk was always struck by the disconnect between the vast sums of money being injected into high-risk companies and the lack of information about them. “A person buying a share of a public company has all this juicy information,” he says. “But if you’re writing a $100,000 cheque to a startup, it’s just handshakes and Excel sheets.”

That frustration led Luk to launch Toronto-based Hockeystick.co Inc. Named after the growth curve every entrepreneur aims to achieve, it offers a secure data platform for startups to share key financial information securely with their investors.

To date, Hockeystick’s database includes 16,000 companies, 250 VCs, scores of angel groups and hundreds of government programs. There’s a public-facing, open-source version on its website, but companies and investors also have protected access to financial reporting tools, and customizable dashboards and charts to track performance metrics.

Hockeystick is now the official data platform of the Canadian Venture Capital & Private Equity Association. And last year, it also partnered with the Lazaridis Institute in Waterloo, Ont., to develop a national scale-up data platform to help VCs, angel groups and government agencies make investment decisions. “Nobody really knows what makes the difference between a successful scale-up and a company that will be globally competitive,” says Kim Morouney, the Institute’s managing director, “so we need to collect data and see what combination of revenues, growth, investment and talent looks like the best bet.”

Hockeystick has also signed a deal with the Angel Capital Association in the U.S., which was drawn in particular to the platform’s privacy safeguards. “We wanted to put together the biggest database of angel group investments across North America so we could figure out what are the factors that really impact investor success,” says Marianne Hudson, ACA’s executive director. “Hockeystick is the first platform that does keep data private.”

Hockey stats once meant goals, assists and plus-minus ratings. But analytics recently invaded the game, giving coaches and fans alike new stats to consider such as Corsi, Fenwick and PDO.

This shift has put a new premium on the underlying data and created a market for a company like Stathletes. Based in St. Catharines, Ont., its hockey stats and analysis are must-haves for people who work in the sport.

“There’s an endless amount of statistics and math you can apply to this type of data,” says co-founder Meghan Chayka. “It just depends on the expertise of the people using it and what type of question they’re answering.”

In 2010, her brother John Chayka wanted to use data in his own hockey school, so he asked Meghan and her now-husband Neil Lane, Stathletes’ CEO, for help with statistics software. The result was Stathletes.

John left the business in 2015 and a year later became general manager of the NHL’s Arizona Coyotes. But Stathletes took the puck and kept going. Today, it counts leagues, teams at all levels (including NHL), players and agents among its clients and has 64 employees, half of them part-time.

Stathletes tracks every NHL game and gathers info from more than 20 other leagues worldwide. Proprietary collection software generates more data in more detail than the leagues themselves collect. Clients can further customize that information to do everything from evaluating players’ aging curves to figuring out why a team gives up two-goal leads.

Wes Wolfe, an assistant coach with the Ontario Hockey League’s Erie Otters, a Stathletes client, says analytics provide an objective perspective. “Data makes it clearer what’s really happening as opposed to relying on your inherent biases or opinion,” he says.

Meghan, named a Yahoo Sports Unsung Hero in 2015, says the analytics boom has been good for Stathletes and for the game. “It’s more competitive and dynamic and will only get better.”

Drowning in data? Here’s a lifeline

As companies increasingly turn to artificial intelligence to scour their databases for a competitive edge, many are hitting a wall: their data pools are information swamps.

ThinkData Works frees these firms’ engineers from countless hours of searching and wrangling data from legacy systems, letting them focus on launching applications instead. Its platform, Namara, uses AI to aggregate data from multiple sources, clean it and serve it in a format that clients’ own AI programs can use. It can also combine firms’ internal data with information from 250,000 publicly available and partner sources.

The technology is being adopted particularly quickly in data-heavy sectors like finance, where some clients are using it to help them better understand their own customers. One client, a major bank, is using Namara to add publicly available trade data to its existing business customer records.

ThinkData co-founder and CEO Bryan Smith says that information can be used by the bank to reach out to customers with financing support or specific product offerings.

“That insight could only come from merging multiple data sources,” he says.

Big data is a big problem for the planet.

The virtual economy relies on the capacity of very real data centres, whose collective energy use is already greater than that of Iran. And it’s growing.

Tech companies like Facebook, Google and Alibaba are expected to build two or three hundred more of these power-hungry giants by 2021. So, making them more energy efficient is a priority.

Ranovus, an Ottawa-based company, has found a way to do that by dramatically increasing the efficiency of the fibre optic cables that carry data both within data centres themselves and between them.

Currently, data is sent down these cables by lasers that emit a single wavelength of light, limiting the transmission rate to around 25 gigabytes per second. To avoid bottlenecks requires large numbers of cables and lasers.

Building on technology developed at Nortel before it collapsed, Ranovus’s system can transmit up to 40 times more data using multiple wavelengths of light that can each carry up to four times more information.

Because the system—called a quantum-dot multiwavelength laser—is miniaturized, it can be packaged together with other data centre components, which means it is much cheaper and uses about one-third of the power of existing technologies.

Ranovus started marketing its product this year and it’s in use in the U.S., Europe and Asia.

Hamid Arabzadeh, Ranovus CEO, says that because tech companies log everything users do on their sites, the market for his company’s technologies increases with every click on the Internet: “Data creates more data.”

MMB Networks is the product of a friendship between three self-professed “supernerds” who, in 2007, decided to venture into the emerging Internet of Things (IoT) market. Since then, IoT—in which appliances, vehicles and other items are embedded with computing power and Internet connectivity—has exploded, and so too has MMB Networks. It now counts Fortune 500 companies Tesla and Spectrum Brands Holdings among its clients and is expanding into Europe and Asia.

Co-founders Mark Borins, Daniel Moneta and Alireza Motamed started out developing wireless connections for hotel thermostats before creating MMB Networks to help companies develop products that use interconnected wireless platforms. Current president and CEO Tim Angus was hired in 2014 to scale up the Toronto-based company, growing the business as the world becomes ever more connected.

For Tesla’s solar division, MMB developed an IoT gateway, or “brain,” that connects panels, other components and the utility grid. It provides Tesla with a view of installations and enables homeowners to monitor their energy use and generation.

Spectrum’s Kwikset division uses MMB’s software to enable homeowners to lock and unlock doors remotely and to grant entrance to third parties. This technology made MMB Networks a pioneer in the Amazon Key program, which allows deliveries to be placed inside a home when no one is there.

“Either a 100-plus-year-old hardware company builds its own IoT software department and spends years in development, or it turns to MMB Networks, reduces time to market and gains interoperability across multiple platforms,” says Angus.