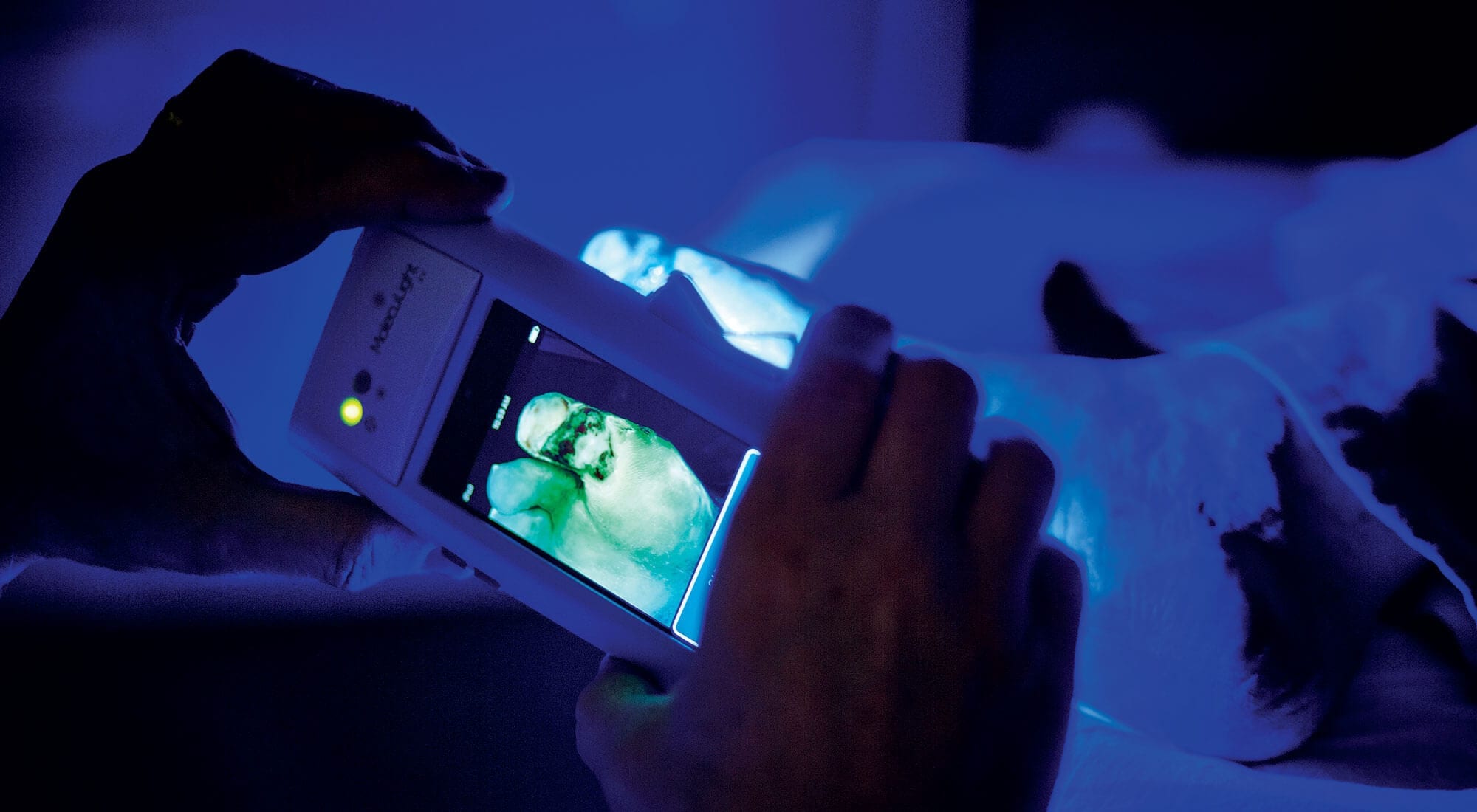 Every day, new technologies are improving lives while also making healthcare more efficient and affordable. From new medicines to point-of-care devices and at-home diagnoses via smart phone—the world is achieving a new level of wellness. And Canadian companies are on the front lines.

As a boy, Dr. Ralph DaCosta dreamed of inventing a device like the medical tricorder in Star Trek. His eureka moment came years later when, as a PhD candidate at the University of Toronto, he realized that bacteria are fluorescent and cellphone cameras could capture their glow.

Pondering potential applications, it struck DaCosta that doctors were simply guessing about the presence of infection in wounds. In 2012, he founded MolecuLight and developed its first product, the i:X Wound Intelligence Device, which received Health Canada approval in 2015, European approval in 2016 and FDA clearance last August. The potential market is huge: roughly two per cent of the world’s population—or about 152 million people—suffer from chronic wounds. And in the United States alone, Medicare spends as much as US$96.8 billion annually on wound treatment.

The handheld, cellphone-sized device enables clinicians to instantly see and target bacteria in wounds, so they can treat infections more effectively. In the dark, the device emits a wavelength of safe violet-blue light that causes the wound and surrounding tissue to give off a green fluorescence while harmful bacteria emit red. One study found that wounds healed nine times faster when the device was used. “If we can close wounds faster, then we’ll cut hospitalization days, reduce complications and reduce the unnecessary use of antibiotics,” says DaCosta.

No pain, all gain

Dan Legault’s resumé included a law degree, a career as a military pilot, senior positions in the travel and software industries, and work as a turnaround consultant. As far-reaching as his experience was, he knew little about biotech. But that didn’t stop his former university roommate—researcher John Wallace, who’d developed a promising pain and inflammation treatment—from asking him to become CEO of Antibe Therapeutics Inc. in 2005. Initially reluctant, Legault agreed and now says, “It’s like drinking from a firehose of learning.”

Widely used non-steroidal anti-inflammatory drugs (NSAIDs) such as Aspirin, Advil and Aleve (naproxen) can cause bleeding in the stomach and intestines. Antibe’s technology aims to solve this problem by linking a hydrogen sulfide-releasing molecule to an existing drug to improve upon it. Its lead drug—ATB-346, a derivative of naproxen—is now in phase two of human studies. “Should we be successful in getting our drug to market,” says Legault, “it would clearly be a blockbuster.” In pharma terms, a blockbuster means annual sales of at least $1 billion.

Antibe went public in 2013 and Legault’s plan is to partner with, or be acquired by, a larger company “when it’s the best bang for the buck.” It has stayed small during the long drug development process, with only seven employees, working with consultants instead of hiring new staff. “It’s a mountain-climbing culture here,” Legault says. “We’re all heavily invested in the company, so we’re all tied to the same rope. And we like the climb.”

Canada’s cannabis legalization hasn’t just created a new retail industry, it has also sparked renewed interest in medicinal marijuana. Although cannabis has been legal for medical use since 2001, there are still few evidence-backed standards for prescribing it and little is known about efficacy, dosages or delivery mechanisms.

Reformulary Group is stepping into the breach. The company already operates DrugFinder, a platform that helps patients understand their prescription medications and discover if better or less expensive alternatives are available in Canada.

Building on that technical expertise and clinical rigour, Reformulary recently launched Cannabis Standard. The platform provides advice from its expert Cannabis Formulary Committee, which has reviewed the best evidence available today and synthesized recommendations. It is also about to launch a research function that will allow users to self-report the effectiveness of their medicinal cannabis using a clinically validated questionnaire.

Helen Stevenson, Reformulary’s founder, president and CEO, says the company named the platform Cannabis Standard as a statement of intent: “We want it to be the gold standard in medical cannabis information.”