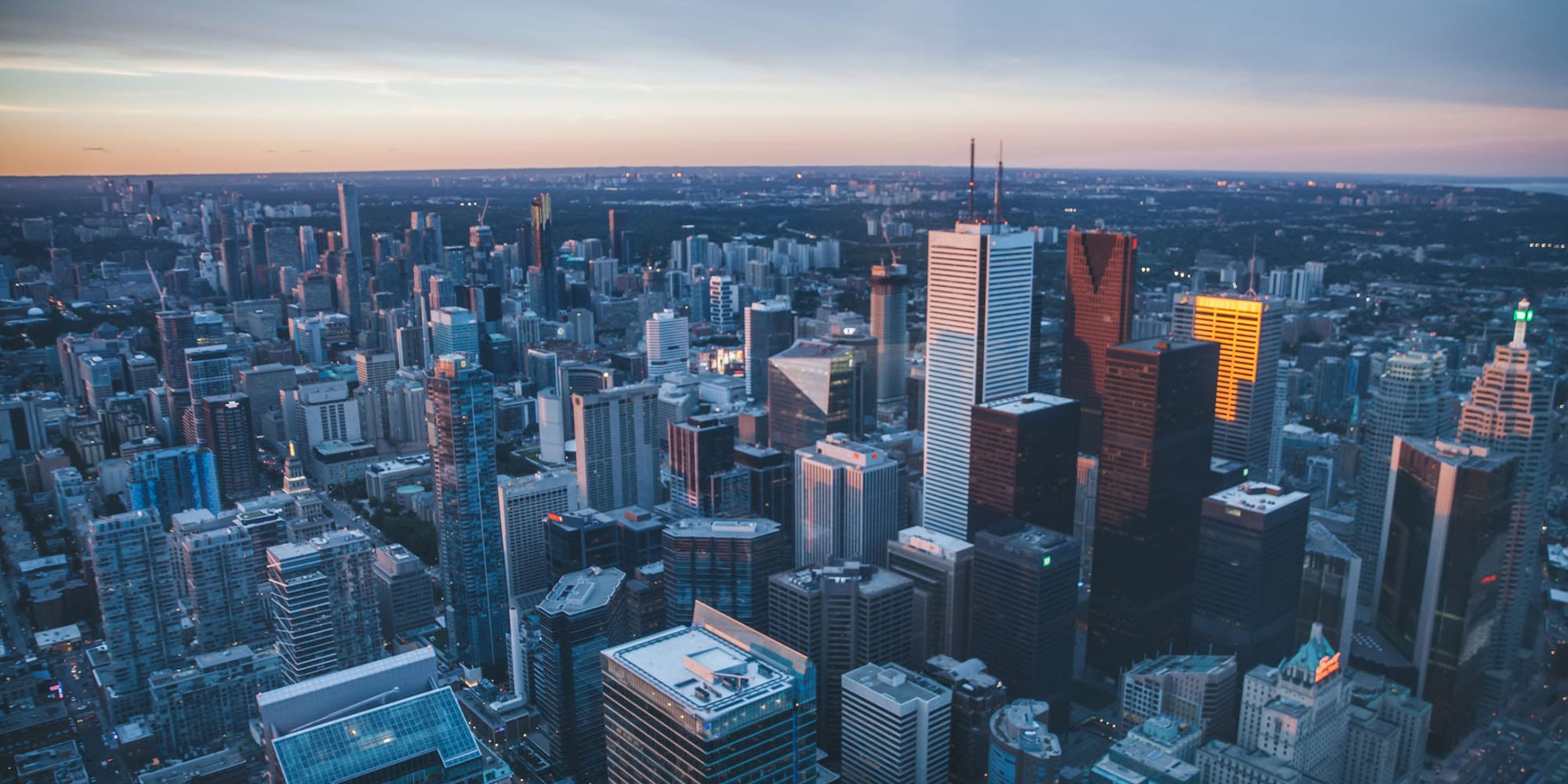 COVID has put the economy on its heels. But there are ways to build back better, from strengthening supply chains to creating more diverse workplaces.

There’s no denying that COVID-19 has had a deep impact on the economy at large — with Canada’s unemployment reaching a record 13.7 per cent in the aftermath of the shutdown. The technology sector has not been spared. The Narwhal Project found a 25 percent drop in funding for private sector tech companies since the start of the pandemic, compared to the same period last year. Tech employment has stagnated, with some companies facing steep layoffs.

The situation could have been much worse. Federal bailout programs, including the Canada Emergency Wage Subsidy and the Temporary Wage Subsidy, gave many companies financing to underwrite payrolls, preventing the unemployment rate from soaring higher.

However, now that the economy is starting to re-open, Alex Ryan, MaRS senior vice president of partner solutions, says that MaRS ventures have a clear message for government. Many ventures told MaRS advisors “We appreciate the support that was put in place in the early days of the pandemic,” he says. “But in the next phase, we don’t need a bailout or a handout. What we’re looking for is for Canada to put innovation and technology to work to ensure that we build back better rather than go back to business as usual.”

Build back better. Ryan made the comment recently at Views from MaRS, a webinar where senior MaRS leaders shared their insights on what’s shaping Canada’s tech sector. That sentiment was expanded on by other leaders at the event, who explored how tech can become more equitable, sustainable and resilient after COVID-19, along with key industry trends and developments. From new strategies for supply chain management to a vision for more accountable, social impact spending, here are six of the most compelling ideas.

Buy up, don’t bail out

In addition to heading up partner solutions at MaRS, Alex Ryan is spearheading a technology and innovation task force as part of the Toronto Region Board of Trade’s efforts to accelerate the post-shutdown recovery. As opposed to more bailouts, Ryan advocates two alternatives. “Governments could be using procurement dollars more strategically to become early adopters of Canadian innovation,” he says. “And we could have a buy-Canadian tech campaign to help the wider industry adopt new Canadian technologies.”

Currently, the federal government does not have a specific “buy Canadian” policy or strategy, nor has there been an industry-led push for a private sector equivalent. Such initiatives would be helpful, though, to bolster the domestic market while international markets are locked down or hard to access. The idea extends beyond patriotism. Many sectors are showing a need for innovation.

“We’re seeing a lot of demand from industry for automated self-service or contact-less service journeys,” says Ryan. “Many of us are joining this call from our homes. We are seeing the need for improvements to the experience and productivity of remote work and virtual collaboration.” These troubles are well within the capabilities of Canada’s tech sector, a sector that has the capacity and skills to address just about anything.

During the early days of the pandemic, many of the 1,300 ventures MaRS supports were in precarious positions, losing customers and facing cash crunches. Now, though, “entrepreneurs have started to do what entrepreneurs do,” says says Jane Kearns, vice president of Growth Services at MaRS. “They’re solving problems. One by one, our companies have found their path forward.”

That path forward often involves creative solutions to the fallout of COVID-19, novel ideas that could meet the needs Ryan outlined and beyond. That might include such companies as BlueDot, which has software that alerts governments and corporations of potential viral outbreaks, or a company called ThinkData Works that allow clients to access and collaborate on standardized COVID-19 data from around the world. “Both are enabling the global community to come together and better understand the pandemic,” says Kearns. Another venture, Spartan Biosciences, has recently signed a deal with Air Canada for its COVID-19 test. “They’ll have results for passengers in an hour to make sure that travel is safe,” she says. “That test may be something more of us think about as we go back into our offices.”

Krista Jones, founding executive of the Momentum program at MaRS, adds BioConnect to the tech companies that are helping ease return-to-work concerns. BioConnect enables touch-less, phone-based access to offices that verifies ID and has a built-in wellness check, allowing people to enter their work places without touching anything. The company is part of Momentum, the group of 53 ventures within the MaRS portfolio most likely to reach $100 million in revenue over the next five years. In order to reach that goal, Jones adds to Ryan’s post-COVID solutions. In addition to mentorship from Canadian executives, “Canadian adoption is actually probably the single biggest thing that can be done to help.” Startups need customers, not charity.

Listen to Jane Kearns, vice president of Growth Services at MaRS, describe what the past few months have been like for startups:

One of the scary realities of COVID-19 has been its disproportionate impact on poor, racialized communities, especially in Canada’s two largest cities, Montreal and Toronto. Both have been national hotspots, accounting for more than one-third of Canada’s total cases, despite comprising less than 15 per cent of Canada’s population between them.

Sasha Sud is the director of smart cities at MaRS. Rather than a hollowing out of cities, he believes “we are going to continue to have a need for cities for all of the efficiencies that they generate, the innovation opportunities they provide.” (Indeed, the future will likely be even more urban. The United Nations predicts that by 2050, 68 per cent of people will live in urban centres, up from 55 per cent today.)

What’s needed now is post-COVID infrastructure that reflects the needs of how people will live in a post-pandemic world. Sud says there “is a need to reimagine or rethink how we build our cities. I think we are starting to see a lot of cities create more open spaces, changing sidewalks, changing roads.” It’s already happening in small ways. The City of Toronto, for example, added bike lanes to key arterials (the Danforth, University Avenue) and closed some roads all together for cyclists and pedestrians to more easily distance from one another.

The dramatic rise in remote work will also have a big change in the way many cities look and operate. If fewer people need offices, that could “unlock opportunities,” says Sud, for affordable housing and more civic space. Sud, however, also highlights a risk. “This might also have the potential of creating a two-tier system for people: those who have the option to work remotely based on internet connectivity, and those that don’t have that option.” Sud points out that workers who don’t have the option are often on the frontlines — grocery store clerks, personal support workers — and marginalized. “The question then becomes: how do we help the transition to make sure that our choices benefit everyone?” he says. “How do we make sure nobody gets left behind?” Solving those challenges as we imagine healthier cities will also result in more equitable cities.

Listen to Sasha Sud, the director of smart cities at MaRS, talk about the need to re-imagine our cities:

Review your suppliers and stock up

In terms of day-to-day business operations, COVID-19 has put frustrating bottlenecks in supply chains. Factories have shuttered, borders have closed or been restricted and new health measures have slowed shipment routes. Those hitches are being compounded by the ever-more tense trade war between China and the United States, which risks fragmenting semiconductor manufacturing and the deployment of 5G networks worldwide. What does this have to do with supply chains? Computer chips are essential to all modern hardware devices, and high-speed 5G networks could help accelerate supply chains, enabling autonomous and contact-less deliveries and rapid, more precise tracking of inventory and delivery logistics.

Prior to COVID-19, many businesses had a “just in time” approach to their supply chains. Instead of paying expensive storage costs to house inventory, companies opted to have raw goods and other materials arrive right before the production of goods. Those goods could then be shipped out just as quickly. “That has always been risky,” says Oshoma Momoh, chief technical advisor at MaRS. “COVID-19 has made it riskier.” Momoh recommends companies carefully review their supply chain dependencies and strategically stockpile. Storage adds an incremental cost, but it also adds assurance that the materials will be there as required, so business can continue, customer needs are met and potential disruptions are mitigated.

Beyond trade wars, there are many other crises intensifying the negative effects of COVID-19. Climate change. Anti-Black racism. Anti-Indigenous racism. Misogyny. “We need to understand not only the impact of each of these crises individually,” says Allyson Hewitt, who leads the social innovation programs at MaRS. “We also need to understand the impact of these intersecting crises.”

One impact Hewitt anticipates is increased pressure on companies, from the public, to be transparent about the diversity, inclusion and sustainability of their operations. “Companies will have to have be authentic, and put purpose at the core of their businesses,” she says. “If they are not authentic, they will be accused of green-washing, purpose-washing or social-washing. There is a strong risk of backlash.”

Climate change is another urgent issue that needs addressing. “Economically, we haven’t figured it out yet,” admits Hewitt, noting that must change, and change soon. Quoting the World Economic Forum she reminds us that “there is no growth on a dead planet.”

Research shows, however, that there is an increased desire for accountability, especially among younger generations. One study, for example, found that 41 percent of millennials research a company’s role in improving society and the environment before deciding whether or not to invest. As Hewitt says, corporations need to take action and deliver true social impact in order to be successful in this context.

Part of Adam Jagelewski’s role as the co-founder and executive lead of the MaRS Centre for Impact Investing is to direct investment dollars to help remedy the ailments described by Hewitt. “The heart of impact investing is a reframing of capitalism,” he says. “We consider the social and environmental impacts in addition to the financial bottom line.”

Critical to the approach is ensuring the dollars invested have direct, measurable impacts. In other words, there has to be accountability. One way he envisions this happening is through what he calls the National Outcome Fund, a proposed pool of money made up of philanthropic contributions matched by government dollars. “Every year, the federal government spends its discretionary budget of around $55 billion annually on social programming,” he says. “That programming usually falls within political priorities and oftentimes we don’t know what the results are.”

As an alternative approach, payments from the National Outcomes Fund would be contingent on pre-determined outcomes being met. In a simple example, the Fund would enter into an agreement to pay an organization running a training program for the number of people hired and retained versus the number trained. “We think that this would have accountability,” says Jagelewski. “We’d like to see more spent toward measurable results.”

Listen to Adam Jagelewski, co-founder and executive lead of the MaRS Centre for Impact Investing, outline a different model for creating lasting change:

To find out more about Corporate Innovation Programming, click here.